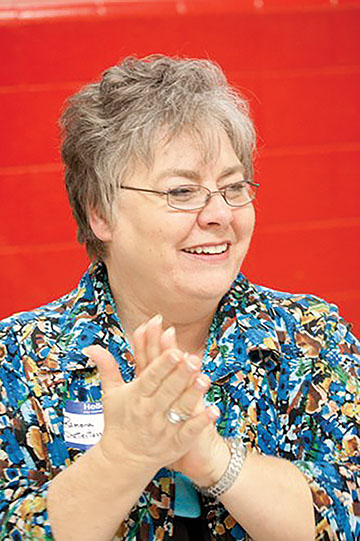 For the past 22 years as circuit clerk, Ramona Wilson has worked from an office measuring 6×11 ft., and from that cramped closet she has managed offices in two very different cities. Despite antiquated storage facilities, she has meticulously kept track of every important civil and criminal record in two county courthouses.

Wilson will certainly miss a job in which she has immersed herself for half a century. She took a long pause before answering a question about what she will miss the most. “Being with my people, the routine, knowing I’m not going to do this anymore,” she replied. She said she’ll especially miss being in court, “my favorite!”

Wilson became circuit clerk in 1998 but had worked as a deputy in the office for many years before that. She has devoted herself to this job and the broader aspects of public service. She retired at the end of December, and spent a few minutes of her last week in office looking back.

She began as a deputy in 1972 when Eileen Harvey served as circuit clerk and the offices were still in the old courthouse on the Public Square in Berryville. Wilson took some time out for child-raising, but was always available to fill in when needed. So even though she had some gaps during those early years, she counts 48 years of service in the office.

She returned full-time in 1992, working for Circuit Clerk Jackie Bunch. When Bunch grew ill and decided not to run for re-election, she urged Wilson to run for the position. “I didn’t want to do it,” Wilson said. “I was happy as chief deputy.” She had some misgivings about handling the job, but Bunch pointed out that she had increasingly taken over the most important jobs as Bunch’s health declined in her final year in office.

Wilson said she had excellent role models in Harvey and Bunch and tried to continue their level of devotion to the job. “Right from the start, I was committed to customer service and to treating everyone the same, like Jackie did,” Wilson said. She said Harvey and Bunch both advised her to maintain the old-school tradition of attending funerals and chili suppers, “to make sure people would have a face to connect to my name.”

The quorum court has made strides in recent years to increase pay for county employees, but for many years Wilson had to find staff who would accept modest wages while working to demanding standards. “You need to find people with dedication,” Wilson said. No one comes into the office with a background in court procedures or legal descriptions on deeds, and the job requires a lot of learning. “Either you like it or you don’t,” she said.

When asked if she accomplished her goals in the office, she modestly replied, “I think so.” Wilson has never boasted about her accomplishments, but others in the court community know what she has brought to the job. Circuit Judge Scott Jackson said he has been an attorney here for 30 years and has only known two circuit clerks in that time, Bunch and Wilson. “They both were very good at dealing with the public,” he said, “and they both did it with style.”

Jackson said he especially admired the way Wilson worked with jurors and made them feel comfortable despite the unusual circumstances. “We’re going to miss her, and she’s going to miss the job, too,” he said.

Wilson has already begun the transition to a leisure life. She’ll have more time to attend her grandson’s athletic events, and her hands have been busy quilting and crocheting. She makes lap robes for hospice patients and has made almost 1,000 masks for schools and children’s hospitals.

Wilson said she leaves the office in good hands. Chief Deputy Marilyn Ferrier will finish the remainder of her four-year term, which ends after 2022. “I’ve learned so much from her,” Ferrier said. “It amazes me how loyal and dedicated she is.” Ferrier said when the working hours of county employees were cut back for the Covid crisis, Wilson was there every day, taking up the slack.

At the end of the interview, Wilson again expressed her gratitude to Jackie Bunch for everything she learned from her predecessor, both personally and professionally. She also had a heartfelt thank-you for the public, “who put their faith and trust in me.”