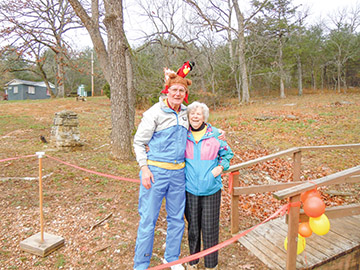 For the tenth year, a hundred or so runners and walkers will show up at Lake Leatherwood on a frosty Thanksgiving morning at 8:30 for the Don Gammie Turkey Trot. Some may be hoping to offset the coming afternoon’s calorie count, but their real purpose is to raise funds for the Grassy Knob Volunteer Fire Department.

Now a USA Track and Field-registered event, the Trot was begun in 2010 by Don and Jean Gammie and continued by the GKVFD Auxiliary. It also became a memorial to Don, an avid runner who set world and national records before he and Jean retired to Grassy Knob.

Don, who considered a three-mile run “just a jog,” didn’t run competitively until he was in his 40s, and then there was no stopping him. His impressive record of first place wins in Masters Track included running the 3,000 meter in 10 minutes, 4.49 seconds at age 58, beating the previous world record for men 50 to 59. He also set a national record in 1500-meter track; and had run 35 marathons and races, usually finishing first in his age group, by the time he retired. An entire den wall in the Gammie home was covered only with first place awards. The others were relegated to spots of lesser honor.

One of the original turkey trotters, Bob Williams, recalls walking with Don, then in his 80s, during the first two Turkey Trots. “We were out there in sleeting, freezing rain and we would both get drenched. I asked Don if he wanted to turn back but he insisted on going all the way to the marker. There were no shortcuts for Don Gammie at all!”

Although Don is no longer with us and Jean now lives in Boston, that spirit of determination lives on in the GK Auxiliary annual fundraiser. The Gammies’ beloved volunteer fire department continues to serve Beaver Lake, Hwy. 187 and more than 800 visitors, businesses and households on and around Beaver Lake with fire and medical emergency services.

GKVFD’s acting chief, Robert McVey, said over time the Auxiliary wanted to fund “something substantial” and of late have purchased turnout equipment, the protective clothing firefighters wear, which costs $2200 per set, and a thermal image camera, which retails for thousands.

McVey noted that the Auxiliary is now building a fund reserve, because, “With our old trucks being in the early nineties, we will soon need to replace a truck. We won’t purchase new, but rather new to us, for somewhere between eighty to a hundred thousand. We are only as good as the tools we have to work with, and we love serving a wonderful community.”

It’s a good reason to take a meaningful trot around the park; so come celebrate the 10th Anniversary of the Don Gammie Turkey Trot and register (adult, family or 12 and under) at www.turkeytrotar.com.The $25 fee includes a t-shirt and medal (before Nov. 13). Pre-registration is not required. Just get out there.