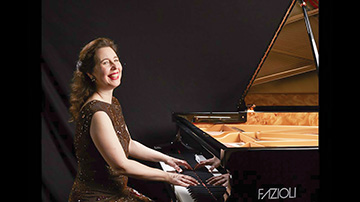 Did you ever adopt a dog at the shelter? Name it, feed it, drive with it, let it sleep in the house, and finally, one day bury it?

Lots of people have. Best friends are hard to lose, and now what? Try to replace the old one?

Canadian virtuoso Angela Hewitt doesn’t just play piano, she’s an internationally acclaimed pianist. Her F278 Fazioli piano, the only one in the world fitted with four pedals, has been used for all her European recordings since 2003.

“This piano is my best friend, best companion. I love how I feel when I’m recording, it gives me the possibility to do what I want,” Hewitt said.

She played Beethoven Variations in Berlin last week. When she finished, the specialist instrument movers showed up to move her beloved piano back to Ottawa.

And for the first time in 35 years, they dropped it. Destroyed beyond repair.

This isn’t independent thinking, it’s just one of those unexpected things that tugs at your you-know-what.

Six Partitas of Bach is how to hear Angela and her piano. angelahewitt.com