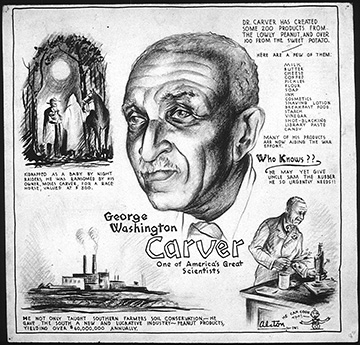 The Black Lives Matter movement reminds me of an artist turned agronomist, and as he put it, “kitchen chemist,” who influenced my life, George Washington Carver.

George Washington Carver was born into slavery outside of what is now Diamond, Missouri, south of Neosho. His birth date is not known exactly, but it was before slaves were became free in Missouri in January 1865. Eighty years later, on July 14, 1943, President Franklin D. Roosevelt created the George Washington Carver National Monument near Diamond, Missouri – the first to honor an African American, and the first honoring a person other than a president.

Carver rose to fame as a professor at Tuskegee Institute (now Tuskegee University), hired in 1896 by Booker T. Washington to run the Agriculture Department. Famous for his promotion of the potential of peanuts, his enduring legacy was the creation of a series of agricultural bulletins intended to improve the lives of African American farmers. He encouraged crop rotation, use of “regenerative farming” methods, while teaching farmers to grow their own food and take advantage of what sweet potatoes and soybeans had to offer, along with wild edibles.

Carver was a strong scientific advocate of developing the economic plant resources of the South, a healer, artist, and mystic. His religious and mystical leanings are revealed in a 1939 book by Carver’s friend, Glenn Clark, The Man who Talks to the Flowers: The Life Story of Dr. George Washington Carver (St. Paul, Minn.: Macalester Park Publishing Co.) still in print today.

Carver got most of his ideas through meditation. “How do I talk to a little flower? Through it I talk to the Infinite. And what is the Infinite? It is that silent small force… When you look into the heart of a rose, there you experience it.”

For me, a touchstone to history was my friend the late Madalene Hill (1913-2009), known as the “Grande Dame of Herbs.” I often use George Washington Carver quotes in lectures. After one lecture, in which Madalene Hill was in attendance, she came up to me and told me about the time she met George Washington Carver. Recently an epiphany dawned on me. Through Madalene, I touched a hand that touched the hand of a slave. What we think of as history is often just current affairs.