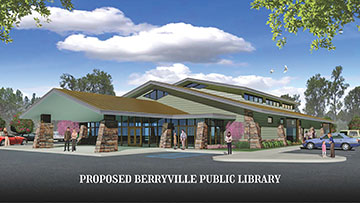 Like the tiny train in the American folk tale, The Little Engine That Could, Berryville’s 3,000 sq. ft. public library is about to steam its way up the mountain to a new $2.5 million, 10,000 sq. ft. building – and do it without burning tax dollars for fuel.

The secret to its “I think I-can, I think I can” attitude is a combination of creative group structuring and strong community support. An April 1 press conference at the library elicited enthusiastic encouragement for the five-year fundraising campaign headed toward a 2025 groundbreaking.

And the project is off to a good start. The City of Berryville has donated 2.5 acres for the new building at the intersection of Branch and Basore Streets near City Pool Park. A donation from the Estate of Burton and Alice George has covered the point-five portion of the $2.5 million building cost; and Craig and Michelle Froman and family have made a $5,000 matching challenge for any donations made to the library building fund on April 7, Library Giving Day. (See berryvillelibrary.org/friends)

In order to build the new facility without using tax dollars, the Friends of the Berryville Library simply reorganized and applied for nonprofit charity status. Friends president, Mary Knight, announced that the 501(C)3 status has finally been awarded, allowing the group to receive tax-exempt charitable donations.

Joe Scott, president of the Berryville Library Advisory Board, announced that the group would partner with the reorganized Friends to raise money, and announced a funding committee headed by Tyler Squires. Jack, Gene and Maria Burch and their families, retired from running Maverick Supply, have been made honorary chairs and leaders of the Building Project Fundraising Committee.

Drawings of the new building designed by native son, architect and Eureka Springs Mayor Butch Berry, reveal light and airy spaces designed for multiple uses. Today, the library serves an average of 250 patrons each day with some 500 events and programs each year, and houses works in Spanish and Marshallese for the town’s diverse community.

Berry has a long history with, and love of, libraries. “I learned to read at the library,” Berry said. “Growing up in Eureka Springs, my friends and I would end up during the winter months at the Carnegie Library after school and on Saturdays. The librarian would read parts of books to get our interest while we were sitting in front of the big fireplace toasting marshmallows.

“The first book I remember reading there was Rudyard Kipling’s Rikki Tikki Tavi. I don’t why that book sticks in my mind. But the librarian gave me the love of books and started me on a journey that still progresses today. I was able to travel around the world and see things in my mind when I was eight or nine years old without leaving our little town. Once a child is given the gift of loving books, they will never be alone.”

Berry went on to graduate from the Berryville school system. After college, he helped design and convert the old Carroll Electric building into what is now the Berryville Courthouse, and in 1978 designed the building housing both the current Berryville Library and what was once the County Health Department, now the County Tax Assessor offices.

When asked if he would be interested in designing this new library, Berry said, “I told them I would love to be able to be part of the new library team. Rick Armellini worked with me and we held numerous workshops and design charrettes to get to the point of developing a design plan… interviewing staff and the public and researching how the new library should function. The staff and building committee and I also visited various libraries around the area to see what issues they had – what worked and what didn’t.”