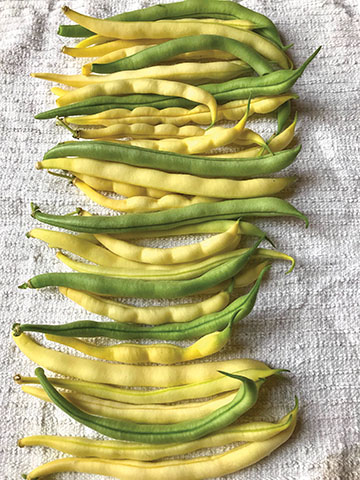 The guy with a thousand beans, and they all have names

John Withee was a photographer and adventurer who scaled the Grand Tetons and twice flew a Piper Cub to the Arctic, but in the spring he would focus on his garden. One year, he went looking for Jacob’s Cattle beans, a variety he had grown and sold as a youngster in Maine. It was harder to find than he expected, but during his journey he became fascinated by many other bean varieties that were known by only a few home gardeners. Bean-collecting became his new hobby.

Casual at first, but word spread beyond his family and friends, and soon beans began to arrive in the mail. He traveled New England seeking obscure heirloom beans because he saw a paucity of varieties in typical seed catalogs, and he did not want these varieties to fade away out of neglect.

The time and resources necessary to maintain his ever-growing collection led Withee to found Wanigan Associates, a nonprofit organization with him as the only staff who recruited like-minded heirloom enthusiasts to help him continue saving bean varieties. Word of mouth and soon enough magazine articles spread Withee’s story and his passion for preserving heirloom bean varieties, and the burden of coordinating such a large effort became overwhelming.

He began corresponding with the upstart Seed Savers Exchange, a seed-saving group started by Diane and Kent Whealy. Diane’s grandfather left her some seeds he had brought over from Germany, and the Whealys became intrigued by the challenge of preserving other heirloom varieties kept from one year to the next by families, but which would otherwise have been lost forever.

So Withee and the Whealys agreed that Seed Savers would take over stewardship of Withee’s bean collection of more than a thousand varieties, all named. This move transformed Seed Savers into the largest private seed-collecting organization in the country, and their collection of other heirloom vegetable seeds also expanded.

Along with the heirloom beans from Withee’s collection came local history and family legends associated with the beans because beans have stories to tell. Somebody’s grandmother or uncle kept seeds from a particular cucumber variety and every autumn made pickles which family members got as presents at Christmas.

In her book The Heirloom Gardener, Carolyn Jabs details many stories of almost extinct vegetable varieties perpetuated by home gardeners. She notes, “The work requires the persistence to ferret out rare old varieties, the patience to keep accurate records, and the commitment to keep the varieties alive by planting them year after year. Yet, despite its demands, collecting heirloom varieties can become a sort of calling.”

Jabs mentioned Ralph Stevenson, a Michigan bean-collector with more than 500 varieties who tries to resupply half of his collection every year. Russell Crow, another bean grower, joined the Seed Savers Exchange and maintains the legacy of some of Withee’s beans. He stated, “Had the Whealys not continued growing and renewing the acquired vegetable cultivars, these varieties may also have passed away. Along with them the germplasm, the genes, and chromosomes, the genetic code that was contained in those varieties.”

Crow tried to find every bean mentioned in The Beans of New York, and even with the resources of the National Seed Storage Laboratory in Fort Collins, Colorado, he acquired only seven of the 80 varieties he was looking for. “What amazes me,” he said, “is that this far down the road, there is still even this much that people have bothered to keep alive.”

I save seeds and I pass them around to fellow gardeners. It has become part of my gardening routine to try to perpetuate varieties, but I am B-league softball compared to major league folks like Withee, Crow, and the Whealys. As Jabs stated, “Their example is an inspiration to anyone who believes that individuals can make a difference.”