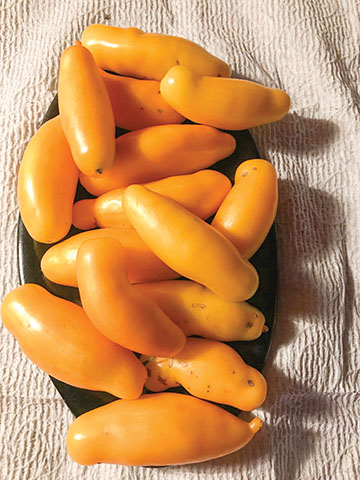 According to folks with time on their hands, the most famous tomato in the world is the Pomodorino del Piennolo del Vesuvio, a cherry type tomato with a nipple. The piennolo term means they are sold braided and sun-dried, and they are grown in Vesuvio National Park in the province of Naples… from Naples with nipples.

Drying them in the Italian sunshine brings out the flavor and they can last all winter. I’ve never grown them, but I’ve dried other tomatoes on the dashboard of my truck, and they did indeed last all winter.

Another famous tomato from the same region in Italy is San Marzano, a paste tomato which means it is slightly elongated and meatier than typical tomatoes, therefore ideal for making tomato paste. Locals refer to it as “the king of tomatoes.” A similar American version is the Amish Paste tomato which originated in Wisconsin.

I wonder if, in a blind taste test, a person could tell the difference between Wisconsin and Italy.

My favorite paste tomato is called Banana Legs. They are yellow. I bought seeds from a company that was phasing them out so the seeds were on sale, and the plants have produced mightily when others nearby struggled.

Other typical varieties on lists of favorites include Beefsteaks and Brandywines of various colors, Cherokee Purple, Mortgage Lifter and Costoluto, a juicy flattened and fluted heirloom variety.

I do not grow hybrids. The Baker Creek catalog offers more than 80 heirloom tomatoes of remarkable variety, so I choose those over a hybrid Big Boy from Burpee. It’s a personal choice. Baker Creek has a beefsteak variety from Belgium that is purple-black on top and yellow-white on the bottom called Sart Roloise. If you had painted it, folks would think you’re a genius.

One variety I am growing this year is Aunt Ruby’s German Green, a large beefsteak type which won a taste test at a big garden show years ago. They are doing well, but my newfound dilemma is how do I know when a green tomato is ripe? Right beside the Aunt Rubys are Pantano Romanescos which are definitely red and ready but supposedly a few days earlier to maturity. Since I am not counting the days, at some point Aunt Ruby and I will have to take a chance on each other.

For the first time in many years, I am growing Jubilee tomatoes, a medium-sized indeterminate golden variety which I recall outlasted all the others. I remember them being very solid and productive which means I will need a bunch of canning jars eventually. Sometimes on lazy days I just blend them up and pour them into freezer bags.

Another famous tomato for fresh eating is the Wapsipinicon Peach tomato, a small heirloom variety with a soft texture and very sweet flavor. A couple years ago I gave some seedlings to a friend who now claims it’s the only tomato he will ever grow. They are named for a 300-mile river in Iowa.

So, tomatoes come in all shapes and sizes plus a Crayola box of colors. Last year, a gardener in Walla Walla grew a tomato weighing 10 pounds, 12 ounces, which is heavier than some bowling balls. It had a circumference of 33 inches. Last year I grew Philippine tomatoes which were approximately a quarter-inch in diameter. The entire season’s growth from one plant did not measure ten pounds.

The Amana Orange tomato might weigh two pounds and grow on a plant seven feet high. There are micro-sized plants which mature at less than ten inches but produce tasty tiny tomatoes. I had a volunteer cherry tomato plant one year that produced more than 100 tomatoes on successive Friday afternoons. They’re all good. This year’s multi-colored hyper-producer is called Atomic Grape, and it is just getting started. I’m gonna need more freezer bags.