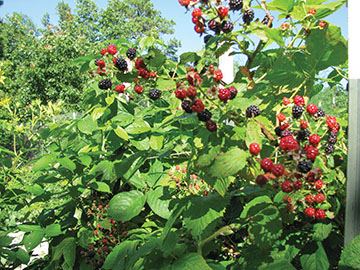 The brambles are calling

The good news is on any continent except Antarctica you might find yourself surrounded by a blackberry thicket. The berries are tasty and refreshing and the canes really, really want your attention.

Smart people who study genes and tiny things can’t figure out exactly where blackberries originated because their brambles, ambitious and stubborn, are in all temperate zones on earth and the rascals hybridize easily. Nevertheless, it’s safe to say they originated in either North or South America, Europe, Africa, Asia or all of them, and it doesn’t matter anymore.

They were not native to Australia, however. There are no traditional didgeridoo songs about blackberries. They were introduced in the 1830s for the berries but soon, because of their thorny canes, thickets of them were used as hedgerows to keep critters and nosy people away.

Regarding ambitious and stubborn, birds and other animals spread blackberry seeds far beyond original expectations across eastern Australia to the point blackberries have been officially labeled a noxious weed by the state of New South Wales and are recognized as a Weed of National Significance.

Yeah, but what about cobblers, crisps, plus you can mix them with blueberries in a tart or eat them off the canes just for fun. I am not the only person who as a six-year-old came home with purple fingers and miscellaneous scratches.

Because humans are so clever, we discovered dozens of uses for blackberries at least two millennia ago. Let’s eavesdrop for a moment.

Two strangers in rural Italy during the Iron Age were sitting in the shade on a log by a trail. The one on the left says in Latin, “My bowels are in distress.”

The other one nods contemplatively and replies (in Latin), “In my valley, we chew on a blackberry root or make a tea with the leaves. Works every time, and that tea would probably help those sores on your feet.”

“Good to know. I feel better already,” the distressed one comments. And the word spread (in Latin).

It was customary into the 19th century in Greece to use a blackberry paste to treat gout. Potions including blackberry leaves were used to treat coughs, animal bites and skin problems. They contain important flavonoids such as quercetin, kaempferol, and don’t forget triterpenes – all antioxidants which bolster the immune system.

The berries have been used as a dye (my shirts as a six-year old, for example) and Native Americans fashioned twine out of the canes.

And, of course, humans long ago began using blackberries to make wine and cordials, and we still do.

Because blackberry canes take care of themselves in the wild, few attempts were made to breed and cultivate them until the 19th century. In Santa Cruz, California, in 1881, a local judge named James Harvey Logan accidentally crossed a blackberry and a raspberry to produce a berry resembling a blackberry but with a dark reddish color. For some reason it was called the loganberry.

The loganberry crossed with a dewberry (a blackberry cousin) to produce the boysenberry. When driving through Oregon and you see a roadside berry stand, it is probably selling marionberries, another cultivar created by crossing two blackberry varieties including the ollalieberry, which is cross between a loganberry and a youngberry, which is a cross between a raspberry-blackberry hybrid and a dewberry. It’s a complicated family tree, but they all taste good on ice cream.