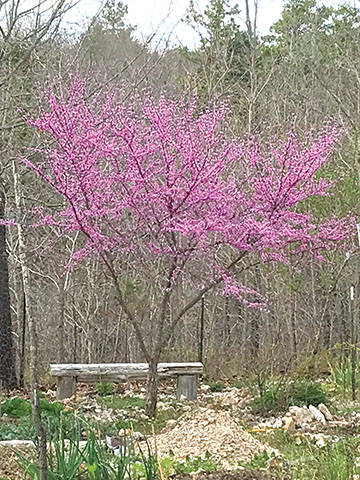 Famous gardener Ralph Waldo Emerson said, “Earth laughs in flowers,” which makes April the opening act for a loud guffaw in my garden. Tiny purple henbit flowers appeared a month ago with winter weather still being winter, but we have new weather now and here comes color. It’s still early, but these are the first flowers to appear in my garden this year.

Silene virginica – Catchfly is a common name for members of the Silene genus because the stems are sticky. The genus is named for Silenus, a Greek deity who lived in the woods. The species in my neighborhood is the Fire Pink. There are species of silene which are edible, but S. virginica is possibly toxic according to some Native American communities. It has bright scarlet flowers which attract ruby-throated hummingbirds. Plants are short-lived perennials, but they self-sow, and they make a magical border along a pathway every spring.

Trillium – A trillium of some kind emerges from underneath fern fronds at the back corner of my shed this time of year. Don’t know how it got there, but it flowered recently… a pleasant surprise when I turn the corner. There are more than three dozen trillium (not trillion) species in the United States, and people who mark things on calendars claim a trillium plant might live 25 years. A plant will abide our picking a flower but not leaves because it will not regenerate new leaves in that spot until next year, and this weakens the plant. This means a stand of trilliums in the woods would suffer from wandering hungry deer. Some species contain sapogenins, a compound used medicinally in coagulants and astringents.

Golden Alexander – Years ago, I used rocks to mark the border of an unused shady space I intended to develop into a bed. Before I made much progress, a Golden Alexander announced itself in a prominent corner, and there are a bunch of them there now.

They show off yellow umbels in April and send down strong, deep roots. Swallowtail caterpillars find the leaves tasty. They are supposedly short-lived, but that corner of the bed has never been without them.

Birds-foot violet – Delightful lavender-colored early spring wildflowers, also known as mountain pansy. I see them in the same vicinity year after year, but they reproduce by seeds only. They prefer well-drained slightly acidic soil which is my rocky hillside. Regal Fritillary butterfly larva feed on them, and the flowers attract bees and butterflies.

Redbud – Redbuds are in full regalia now. Some yonder year, I put a redbud sapling in a temporary spot in the garden, just for the moment until I readied the ultimate spot, which I never did, so the redbud is now the dominant object in the garden and bursting out pink all over the place. And the flowers are edible! Not much to them, but there’s a small pleasant taste, sweeter than a bite of parsley, and chemists wearing goggles want us to know redbud flowers contain anthocyanins and some other really groovy things.

Lilac – Eight years ago, I took a sucker jutting off from a mother lilac bush and planted it in my garden. I did not know how to care for a lilac, but it has responded to minimal attention with quiet strength and 900 blooms. I’ve learned to keep the soil neutral for more flowers.

Bok choi – A hardy plant made it through last winter, and it just flowered. It was a volunteer from a plant that was planted last spring. I will let it go to seed and plant the seeds in autumn.

Arugula – Several made it through the winter with only hickory leaves and henbit for cover before flowering recently. Arugula is a reliable, often prolific, self-seeder. Pliny the Elder and others considered arugula to be an aphrodisiac.

Heeheehee… these are just the first few chuckles. The laughing has begun again.