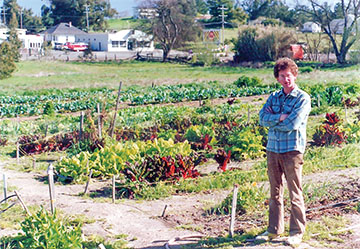 The real dirt on Nicky

In 1983, Old Adobe Developmental Services, a nonprofit agency in Petaluma, Calif., created Luna Nueva Farm, an organic vegetable and herb farm. OADS was always an innovator in serving adults with developmental challenges, and since locals in the county were on the vanguard of the organic food movement, growing vegetables for them seemed like a good idea.

Eight to twelve workers per day of all skill levels dug beds, weeded, transplanted seedlings, harvested produce and prepared it for market to the best of their abilities.

After a successful first year on about a half-acre plot, we moved to a 19-acre piece of land and took over about two acres. Because the front area was on a slight slope, we erected an above-ground pool at the top and installed a drip irrigation system for the beds. The pool filled up at night and we opened the drip system during the day.

We grew most everything in the seed catalogs because customers at Sonoma County health food markets were knowledgeable and daring in their culinary habits. Red-speckled chicory was popular, for example. We were the first in the county to market Romanesco broccoli. We sold purple peppers, yellow pear tomatoes, red chard, Gold Rush zucchini, Easter Egg radishes, peppers from Hungary and Mexico, cucumbers from Japan and Armenia, greens from France and Asia plus volunteer lettuce, broccoli, cilantro and pak choi.

Loyal shoppers learned we delivered to the Santa Rosa Market on Wednesday mornings, so they planned accordingly to get first choice. We also delivered to health food stores, a couple restaurants and an ashram west of town near the coast.

At Luna Nueva, gardening was the medium but people service was the message.

OADS was a leader beginning in the ‘70s in creating opportunities for a largely disenfranchised population who historically had little to look forward to after they finished school. We created a variety of programs focused on what individuals wanted and adapted programming to their abilities.

Joe worked at the farm from the beginning. He was a young versatile worker who seemed to know what needed to be done. If someone needed help with a task, I was confident sending him to the rescue. Some folks called our project Joe’s Farm.

Earl was a senior member of the crew but not yet ready to retire. Upon arrival at the farm, he would grab a hoe, find a bed that needed careful cultivation and pace himself until time to leave. At day’s end, it was easy to see where Earl had worked. If I asked him how he was doing, he would respond, “I’m getting there,” which he later explained meant he was one day closer to seeing his mother in heaven. I named our newsletter Getting There.

Victor was a quiet, dedicated worker who took over our compost area. He learned how we wanted the piles turned and materials mixed, and whoever brought Victor a wheelbarrow load followed his direction.

Richard shoveled beds ahead of the transplant team or wheeled a barrow over to Victor. He was the first person I ever saw occasionally pull the wheelbarrow behind instead of pushing it, which sometimes makes good sense.

Albena and Diane were transplanters. A different Joe was a meticulous hand-weeder but preferred to work alone. Everybody had skills but at different levels.

The point was everyone contributed. If I were on my way to transplant lettuce when someone six rows over suddenly had a difficulty, I would put down the flat of lettuce and see if I could help. The lettuce got its turn, just later.

It was a peaceful, healthy environment in which to spend the day, and we did it for ten years. Those who worked at Luna Nueva Farm will say it was a deeply satisfying adventure.