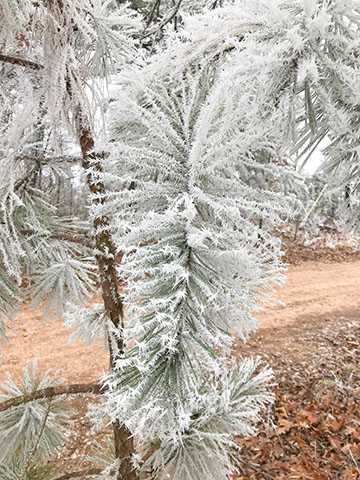 Frosty the Annihilator was a happy jolly soul…

Weather predictor people insist Carroll County will have its first frost of the season before the end of October, and they are never wrong. The average date for a first frost in our area for the past 16 years has been October 28, but last year it was October 12, which this year would be Indigenous People’s Day.

The earliest frost during that period was October 7, 2012, and the latest was November 24, the day before Thanksgiving in 2004. This year temperatures have already approached 40° more than once, but it appears we are entering an autumnal warm spell.

Gardeners know that a frost means the end of the season for soft-bodied vegetables like tomatoes, peppers, cucumbers and squash. Their vitality might be waning already because they are annuals and have completed their assignments. Some vegetables such as kale, collards, spinach and winter radishes, however, can handle mild frosts.

The science of frosts can be technical but not in this discussion. A frost occurs when gaseous water (vapor) gets so cold it becomes a solid (frost). The exterior surface of a solid such as plant leaves or your windshield cool below the temperature at which vapor turns to a liquid. The water vapor freezes and we get tiny ice crystals called frost.

Valleys get more frost than hilltops because cool air sinks, plus there is more wind at higher altitudes to keep the cold air more unsettled.

Scientists have different classifications for frost. Hoarfrost is what we see on grass on cold mornings or in the freezers of old refrigerators. A cold wind can cause advection frost in trees or on utility poles. Single pane windows get window frost when warmer indoor air meets freezing air outside. Rime is the frost that collects quickly on objects in very cold, wet locations like when paddling a kayak through Arctic waters.

Important to remember are the words hoar and rime because they are valuable as crossword answers.

Gardeners in October are already pulling out some crops and preparing others for cold weather. Extra mulch protects the soil from colder temperatures but also helps retain moisture which absorbs the cold so roots are less vulnerable.

I’ve seen orange orchards with large fans installed during winter to simulate strong winds. The extra circulation keeps the frost at bay up to a point. Major horticulturists such as rose gardens wrap plants in burlap bags during vulnerable nights to protect the plants.

Home gardeners can be creative to protect their homegrown itsy-bitsy kales and lettuces during cold weather. One strategy would be to construct a makeshift greenhouse with framing and sturdy plastic sheeting. I have kept pepper plants alive through two winters this way. One of the peppers was a hybrid lavender bell pepper which reverted toward its original parent by the third summer.

Any kind of sturdy covering– canvas, rugs, plastic– might save vulnerable plants overnight. A lawn chair covered with cardboard might work, but all of these require the time and labor to remove them in the morning and replace them at night during a cold spell.

Watering the soil is helpful because water absorbs the cold out of surrounding soil thereby diminishing harm to nearby plants.

I put a thick layer of mulch on my garlic bed and hold the mulch down with an old hammock. Leaves poke through the weave in the hammock, but when the temperature drops too low, the leaves wilt. However, the mulch protects the bulbs underground, and in spring the leaves spring through again, and I get a plentiful harvest of bulbs in early summer.

Bottom line – here come frosts. Wear a jacket, be creative, protect your plants as best you can, and relish some brisk adventures in your garden.