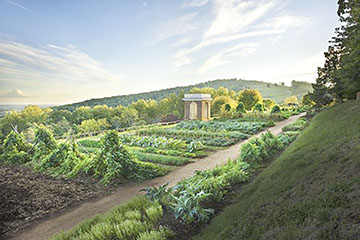 According to Monticello.org, our third president, Thomas Jefferson, maintained at his Monticello home near Charlottesville, Virginia, an 80-ft.x1000-ft. terraced vegetable garden “hewed from the side of a mountain with slave labor” which overlooked eight acres of fruit trees, grape vines and other fruits such as gooseberries, figs and raspberries.

The expansive garden was Jefferson’s horticultural laboratory in which he would grow dozens of varieties of peas and squashes, for example, and save seeds from the best plants for planting another year.

When not gardening, Jefferson wrote the Declaration of Independence and the Virginia Statute for Religious Freedom, became governor of Virginia, served as ambassador to France and as our new nation’s first Secretary of State, got elected President for two terms during which time he arranged a deal with France for the Louisiana Territory, and later designed and founded the University of Virginia. His collection of more than 6000 books provided a good start for the future Library of Congress.

But back to his garden. Jefferson organized his “squares” of beds according to whether they would bear fruits (beans, tomatoes), roots (carrots, potatoes) or leaves. He enjoyed salads, so he grew maybe 20 varieties of lettuce plus mache, orach, arugula and endive. He learned about some of these vegetables during his years in Europe. His famous “Garden Kalendar” indicates he planted lettuce and radishes every two weeks for a steady succession of each.

One entry in the Kalendar notes how far two-thirds of a pint of asparagus beans planted in a specific pattern would go, which is indicative of Jefferson’s scientific way of thinking.

His favorite vegetable was English peas, and he grew at least 15 varieties. He and his neighbors had a yearly contest for who could produce the earliest pea. He also grew more than 20 kinds of beans for both fresh consumption and for drying.

He received seeds from his European and American connections which piqued his scientific curiosity. He established a bed at the base of the orchard wall for figs from Italy and France because of the warm microclimate. From the Lewis and Clark expedition, he received samples of salsify and Native American beans. He grew peppers from Mexico, asparagus from England, artichokes from France and sea kale, a perennial cabbage which grows wild along European seasides.

Jefferson listed in his records varieties by the person or location from which they came. Some of the varieties have been lost or renamed, but one of his lettuces came from Kentucky farmer Jack Bibb, and the name continued with the vegetable.

He grew a healthy crop of hemp every year for use in making clothing, but there are no records of Jefferson growing hemp’s famous cousin.

One season when Jefferson was away, his daughter Martha Randolph wrote him about insect problems in the garden, and he responded that during the winter they would apply a heavy dose of manure to the garden beds. “When earth is rich it bids defiance to droughts, yields in abundance, and of the best quality.”

Reports indicate Jefferson was more the inspiration and planner for the garden work rather than the hands-on participant. He would ride the property on his horse and supervise the slaves who actually tended the garden and spread the manure. During his life, Jefferson owned as many as 600 slaves. Though the claim is often disputed, evidence is overwhelming Jefferson fathered six children with his house servant Sally Hemmings after his wife Martha died.

One of his workers remembered about Jefferson, “For amusement he would work sometimes in the garden for half an hour in right good earnest in the cool of the evening.”

Nevertheless, the Monticello garden he envisioned and managed has been maintained to this day with similar varieties according to Jefferson’s original design. Tickets are available online.