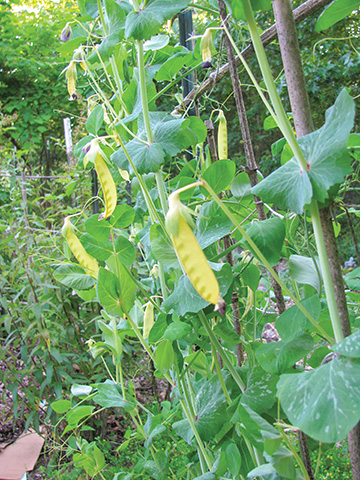 It’s half-time for the summer garden, so the United Nations and I want to present our mid-season garden report. Yes, there were yahoos and boohoos, but I’m eating tomato-cucumber-basil salad from the garden, so that’s a yahoo.

There were five members of the brassica family in the lineup. Red Russian kale, a garden veteran, grew alongside red onions which came from a bag of sets I purchased at Walmart, and I am confident the Walton family grew those sets in their backyard in Bentonville.

Old Timey Blue collards, an heirloom from Alabama, were so reliable I gave collards to the food truck lady. Growing right beside them was yod fah, a delicious Chinese broccoli but the seeds were grown in Thailand, and now I have seeds growing in Madison County, so… cool!

The kohlrabi shared a bed with Beurre de Rocquencourt bush beans from France, a variety originally from Algeria. They are basically tasty yellow wax beans with a cosmopolitan name. The bean team was also represented by Kentucky Wonder pole beans and purple-podded pole beans, a prolific Ozark native.

Two of the purple bean vines were surprise volunteers from last year, and they grew on the same trellis as golden snow peas from India. These vines reached beyond the six-foot trellis, and the peas are softer and sweeter than the green snow peas I’ve grown for years. These representatives from India and the Ozarks complimented each other on the trellis – the purple beans have purple vines and the peas have pale lavender flowers with yellow pods.

Right across the path are several red Malabar spinach plants, a native of Sri Lanka and Indonesia. One of them is growing up an amaranth (from Mexico). The Malabars handle heat well and will produce until a frost lands.

Represented in the pepper contingent are Japan, Brazil, French Guiana, Turkey, Hungary, North Macedonia. I never knew south central Europe was such a pepper hotspot, but I’ve never been there so what do I know. Regardless, their peppers have cool names like Leutschauer, Rezha, Feher Ozon and Ajvarski. Also growing are two plants from seeds I saved from the snack table at a party in California 15 years ago.

The tomato delegation, growing nicely side-by-side in two-and-a-half beds, are from Italy, Iowa, Oklahoma, Missouri, the Philippines, plus some plants from seeds I saved over the years from this Madison County garden. The United Nations and I have determined midseason intervention is required for tomatoes because of inadequate soil preparation in spring. The soil looked good, spaded easily, but it must have needed more oomph to prosper an entire season.

Also showing mid-season distress are cucumbers from Israel, Armenia, Japan, the United States plus volunteers from the compost. Regarding the composters. their ultimate origin is unknown since the seed-bearers appeared without warning out of compost in the Malabar spinach patch last summer, but their presence has been unanimously endorsed by the United Nations Cucumber Unity Commission which consists of delegates from the other cucumber origin nations. Basically, everybody loves everybody. It’s easy. That’s how it works in this garden.

The Cucumber Commission and the Tomato Harmony Sub-Committee met for an intervention confab, and the delegates from Armenia and Italy in unison began channeling the ghost of Ruth Stout rapping, “Mulch, mulch, baby, can you pile it thicker, mulch it like a monster, mulch it a mile, see me smile…” Ruth liked her mulch, and we liked Ruth.

So, mulch, water, compassion and a pickup load of horse poop is the United Nations mandate for these hot, dry UNITED WE STAND times.