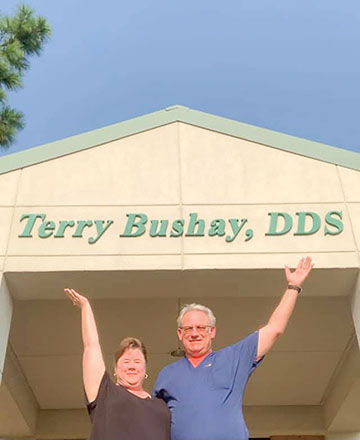 Dr. Terry Bushay and his wife, Rosemary, set up their dental practice in Holiday Island on January 24, 1996. That was before there was anything at the shopping center except the building that also had offices for Dr. Dan Bell and Dr. Andy Langston.

“I predated everything up here,” Bushay said. “There was no water tower. No grocery store. It was completely under development. I was basically the third business there after the two doctors.”

Bushay was going out on a limb setting up a dental practice in a town that had never had one. He left a job working for a big practice that had offices in Fayetteville and other locations. That company had a habit of getting rid of senior dentists and hiring younger dentists at less pay.

“I sensed some writing on the wall and started looking around for another position,” said Bushay. “Dr. Bill Dill in Fayetteville mentored me and helped me open an office. Bill Dill introduced me to Tom Dees, who developed Holiday Island, and the supply guys. Tom was extremely helpful. I couldn’t have made it without him. He gave me free advertising and workers to help move equipment into the office. The supply guy from Dallas was also helpful. I opened with less than $40,000 worth of equipment, and he waited six months to send the first bill. Trust me, I needed the help.”

He was welcomed with open arms, or maybe with open mouths is a better way to put it.

“From the time I opened, it was clear this was a vacuum,” Bushay said. “There was a big need. Within two weeks, it was going full speed. It was an extremely underserved area and I can’t explain why because it is nice living here.”

Bushay is known for his friendly, folksy style that would put patients at ease and make dental treatments easier to handle. Always ready with a joke, there was an informality about the office many found comforting.

“I tried to be as unintimidating as possible,” he said. “I can’t imagine anyone being intimidated by me. I did a lot of talking. Three people in my whole career asked me not to talk. The rest were happy to be distracted with chit chat.”

“They were great because they got along with each other and were self-starters,” Bushay said. “This job you leave when you’re done treating people, and you work through lunch sometimes. It’s not very predictable. They all were comfortable in performing under those conditions and putting up with me goofing around all the time. You just try to build a work environment that is fun to go to. It is fun to talk to patients and get to know them and, every once in a while, you had to do a little work.”

There was a design behind the chatter. By talking to patients, he was able to look not just at someone’s teeth, but their financial predicament, their situation at home, age, fear of dentistry and health problems. All that was taken into account when deciding on the best treatment.

“There is this big, huge package you have to weave together,” Bushay said. “There are so many factors you have to think about. It is never clear cut. Seminars say offer the best treatment possible. That gets overplayed too much. People need alternatives. Let the individual give some feedback. It is a finesse. I’m an advisor. I don’t tell you what has to be done. I’m supposed to give you some alternatives.”

There are a lot of military veterans in Holiday Island and Bushay, who at age two lost his father in the Vietnam War, was particularly close to his veteran patients.

Bushay recently retired unexpectedly because of medical problems with his left hand. He had surgery a year ago to replace two herniated discs in his neck that were causing him pain. The result of that surgery is ulnar neuropathy in his left forearm causing muscle wasting in that hand. He determined that his skills were not up to par, and so closed the office this summer.

He tells people not to feel sorry for him.

“You just take what life throws at you,” Bushay said. “It is not cancer. It is not terminal. The surgery I had was successful because it got rid of my pain. I feel fantastic. I just have a wobbling left hand. You need two very dexterous hands to do general practice dentistry. The ‘s’ in dentist stands for surgery. You want your surgeon to have two hands. To continue practicing, I would have needed another surgery and that had risks which included the possibility of pain afterwards.”

Terry and Rosemary, who was office manager, met in high school in Springdale. The plan was that she would work in dentistry learning the office end of things while he went to college and dental school.

“By golly, it worked out,” Bushay said.

Don’t worry about him being bored in retirement. His hand is good enough for general life. He had a little trouble with bike riding, but can still fish, canoe, hike, play golf and travel.

“Right now, I have the golf bug pretty bad,” he admits. “I play in the old coots league. Arkansas is the perfect state and Holiday Island is the perfect area because of the golf course and the lakes in every direction. I also hope to take some classes with ESSA and will continue to be active with Rotary.”

“I love Rotary,” Bushay said. “That is my passion. It gives me a sense of purpose. I’ve been president of the Eureka club once and the Holiday Island club twice. There is travel involved with that, periodically, such as delivering wheelchairs in Mexico and Jamaica. I am going to do it again once it gets safe regarding Covid, but we are not quite there yet.”