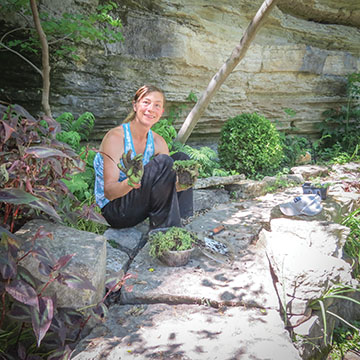 Parks’ gardener Denise Pepmiller has plenty to keep up with taking care of 13 city gardens including trash and dog do removal in addition to growing plants at the Community Center greenhouse, planting, watering and weeding the gardens. But she considers her work to be even broader.

“The most rewarding part of the job is being a steward for the critters,” Pepmiller said. “We have ghost salamanders in a lot of our streams. They are super rare. We have designation as a Bee City USA. I have a great relationship with bees. Being the nerd biologist that I am, I help all the nature around me and facilitate those ecosystems. Yes, there are pretty flowers involved—green lives matter. But it is way more than that.”

The parks are enjoyed by locals, visitors and anyone walking by. Pepmiller said she gets peppered with questions on a regular basis and brings smiles to the faces of the people she interacts with due to her enthusiasm for the environment.

“That to me is the coolest part, teaching people, including children, by sharing my love of all the critters and the ecosystem,” Pepmiller said. “The Ozarks is a very specific biome. We are as diverse as the rainforest.”

And she continues to learn herself from what she calls “a great community of super nerds fluent in native plants, bugs, trees and invasive plants.”

“I don’t have to know everything,” she said. “I just have to know who to ask. Taking time to visit with tourists is a wonderful part of my job. There are so many people who visit here just to see the spring gardens. They are what make Eureka Springs special. And the tourists are the ones who bring the money into town. When you see a bunch of pretty flowers, you are in a good mood naturally. I’m just a steward for generations of fabulous gardens.”

Pepmiller grew up in the Ozark County, Missouri, and considers herself an original hillsally (female for hillbilly). Before her grandpa would mow, her grandma would go out and make a salad of the greens in the yard.

“It was very delicious,” she said. “My one auntie had a half-acre food garden and I learned a lot from her. Even as a small girl, I appreciated gardens and farms. Later I worked in a couple of commercial greenhouses.”

During that time, she also had cervical cancer. After treatments, her doctor said it was highly unlikely that she could get pregnant. But she is now the mother of a six-year-old, Delphia, who is also a big fan of gardens and likes to start plants.

Pepmiller has been back and forth living in Eureka Springs a few times. She worked at the Eureka Market when she was pregnant, and did a season helping at Kings River Outfitters. When her mother retired and moved to Montana, Pepmiller joined her living there five years and working at a local feed store where she helped run their greenhouses and got all the state certifications for use of agriculture chemicals.

Northern Montana is a different world. Here schools can be closed for just a small amount of snow. In the area close to the border of Canada, the schools were closed only if there was a threat like a mountain lion in the gym or a pack of wolves in the playground. Nearly everyone carried a gun for protection from wild animals.

The winters were long and cold, and Pepmiller decided to relocate back down to the Ozarks.

“It turns out I’m a summer flower,” she said. “I need a lot more sun and water than Montana has to offer. I also still have a lot of my family here and moving back allowed me to co-parent with my daughter’s father.”

Like other parks’ gardeners before her, Pepmiller has a hard time getting everything done in the 40 hours weekly allotted to her. She takes the first half of the day and does daily chores at all 13 parks. She picks up cigarette butts, dog surprises, trash, and masks. She has had to scrape human poo off the walls in the male restroom at Harmon Park, which is left open at night. She also tries to cover the carved graffiti on the East Mountain gazebo overlook with wood putty and paint.

The second half of the day, she transplants, mulches, weeds and waters.

Recently there was some stress on the gardens from four inches of rain in a short time. Pepmiller tries to listen to the water and the gardens to understand where the water will come blasting through when there are extreme rainfalls. And she puts the kind of plants in those areas that will hold the hillside together.

Last fall she harvested cones of seeds out of parks’ gardens, and during the winter storms in February worked at the Eureka Springs Community Center greenhouse planting seeds primarily of native plants and plants attractive to pollinators. A third of those plants were donated to the community center as part of the contract for Parks using the greenhouse. Many of those were sold during recent Earth Day activities.

Then a whole collection of native plant seedlings was donated by Rose Gergrich of Hogeye, Ark. The rest of the plants used in the gardens this year were grown by the FFA group at the Eureka Springs High School greenhouse.

“Their price matched the big box stores and the quality of the plants was superior,” Pepmiller said. “They did all of our hanging baskets and most of our annuals.”