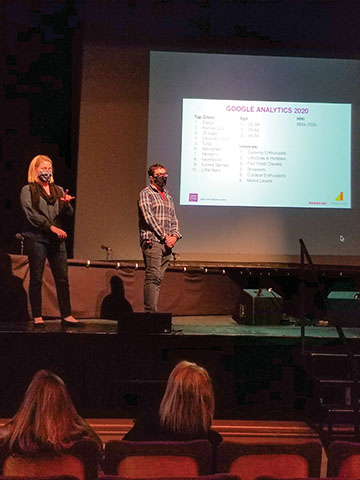 Eureka Springs City Advertising and Promotion Commission met Nov. 11 for a workshop where commissioners, with the exception of Terry McClung and Bobbie Foster, were provided a presentation from the marketing firm Paradise Advertising and Marketing, Inc. Four representatives from the Florida-based firm were present including the Vice President of Account Services Kristen Willyoung Murphy. She and Media Buyer Greg Reinhart gave a general presentation of the services they plan to provide the CAPC in 2021.

The CAPC has already approved $711,000 for marketing in 2021, indicating Paradise has a clear budget with which to work. While many of the visual slides were too blurry for the audience to read, Paradise explained their marketing plan was similar to the services provided in 2020 which focused on target markets within a five-hour radius, Kansas City, Tulsa, Dallas/Fort Worth, Springfield, Little Rock, Oklahoma City, St. Louis, and Memphis. Paradise representatives said they understand the seasonality of Eureka Springs tourism where tax collections in a typical year are highest in June, July, September and October.

Paradise utilized 2020 Google Analytics to determine who the primary tourists were to help understand how to perpetuate marketing strategies in 2021. The top three cities in this data indicate the tourists were traveling from Dallas, Kansas City, and Chicago, with Oklahoma City, Tulsa and Springfield right behind them. The top age brackets were 25 – 34, 55- 64, and 45-54 respectively, and the annual household income was $85 – $200K.

Murphy said this was her third visit to Eureka Springs, and during this visit her team spent time with CAPC staff as well as primary Eureka Springs business stakeholders. When the press asked Murphy to identify who Paradise spoke with during their time here, and who they deemed were the primary stakeholders, Murphy declined to provide that information on the microphone.

Instead, she asked to provide that information after the meeting, which resulted in listing a few commissioners such as Susan Harman, Jeff Carter, as well as three non-commissioners Jack Moyer and Amanda Haley of the Crescent and Basin Park Hotels, and Randy Wolfinbarger of the Best Western Inn of the Ozarks.

After the Paradise presentation commissioners discussed the 2021 May Festival of the Arts, and Chair of the Arts Council, Sandy Martin, said that removing the word “May” would remove limitations on the event beyond that specific month, making the event potentially celebrated longer and having more of an annual impact.

She said she would be happy to work with the CAPC event planner Tracy Johnson but reminded commissioners that the CAPC has a membership seat on the Arts Council which was once filled by the Director of the CAPC and is currently vacant. There was an implication that the CAPC’s active participation in the Arts Council meetings would enrich a working relationship in the cooperative efforts of the Festival of the Arts and the general art projects within the city. Commissioners seemed unaware of this existing seat and did not indicate they wanted the interim-director, Gina Rambo, to fill it, although commissioners said they would provide the event with $25,000 of financial support, although it was a workshop, so no vote.

Commissioner James DeVito said that local election results would affect who holds seats on the CAPC, implying that incumbent alderman Susan Harman was not reëlected and would no longer hold a seat on the CAPC. DeVito said he wanted to delay the approval of any further budget items until the new commission meets in January.

The next CAPC meeting is scheduled for Wednesday, Nov. 18 at 6 p.m. in the Aud. It was noted that the HDC is meeting at the same time and place, so the CAPC may be moved to the basement.