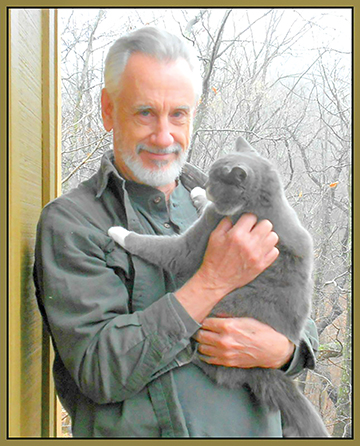 Before moving to the Eureka Springs area in 2005, artist Jonny Haydn spent much of his life on the move. He drove taxis in Boston, limousines in Orlando and charter buses in Los Angeles where he was a Hollywood tour guide. He has traveled the world between jobs, coming back home penniless, but knowing he could soon get another job driving.

He was living in Vero Beach, Fla., in September 2004 when his house was flooded by Hurricane Frances and then, three weeks later, Hurricane Jeanne. He was in the beginning stages of becoming a concrete and rock sculptor, and didn’t want his work to be ruined by flooding. He wanted to relocate to an art community, and “found” Eureka Springs. He moved here and worked for a while as a trolley driver and Ghost Tour guide at the Crescent Hotel.

When he was living in Florida and California, Jonny became friends with Prem Rawat, who has a worldwide following. Millions of people listen to or watch his presentations on how to practice inner peace.

Prem was considered a child prodigy and gave his first speech about peace at age four.

“Prem Rawat has a wonderful sense of humor, which makes him one of the most entertaining public speakers in this world,” according to an introduction to one of Rawat’s YouTube videos.

Jonny felt a longing to be more involved in Prem’s work, and in 1989 moved to California to be closer to him. Jonny was part of a labor force of students from all over the world who helped build Prem’s home. The family’s original home, in a beautiful location, was too small for a family with four kids. It leaked when it rained.

“Prem is brilliant mechanically and with software, in addition to being a teacher,” Jonny said.

In January 2019, Jonny began presenting Prem’s Peace Education Program (PEP) workshops on Wednesday evenings at 7 p.m., in the Carnegie Library meeting room. PEP workshops are independent of the library itself. Those attending have remarked that the meeting room is a good environment for learning. Participants watch one of Prem’s PEP videos, take notes if they choose to and then have a group discussion. The workshops are designed to help people discover their own inner resources.

“The peace and harmony that people are seeking is alive and well inside us,” Jonny said. “There is a potential for knowing peace within. There is a way of learning the strengths and positive attributes we all have, qualities that need nurturing. I need it.”

Topics of the workshops include peace, appreciation, inner strength, self-awareness, clarity, understanding, dignity, choice, hope and contentment. While there are 10 video presentations, each stands alone. You can join the workshops at any point without having to have seen earlier videos.

Jonny doesn’t say a lot during the group discussion.

“My role is to simply stay out of it,” he said. “I’m there as a facilitator. I hope that if people enjoy it, they will come back. The messages aren’t really complicated or difficult. People appreciate its simplicity. One student said he learned that within himself there was a wealth of goodness that he wasn’t exercising as much as he could.”

One of the ideas Prem uses is borrowed, perhaps from the Cherokee, the analogy of having a bad wolf and a good wolf within. Whichever you feed the most will be stronger.

The videos can vary widely, and at times participants have been remarkably open about the challenges they have faced or are currently facing. No one is pressured to speak.

And it isn’t a matter of having to be a student of Prem.

“The beauty of Prem’s approach is it is not a club you join,” Jon said. “It is just a clear vision and way to express things that are important to all of us.”

Jonny likes to look at the origins of words. For example, the Latin word spiritus means “breath.” For him, being spiritual means being grateful for breath, for life.

“I’m just glad to be alive,” he said. “It is a wonderful gift to be alive. It’s magical. We get so caught up in all the things we have to do that we sometimes forget how wonderful it is to be alive. Peace Education reminds people of what they already have.”

One way that Jonny expresses that joy is through artwork, some of which may be seen at hopesculpture.com. He makes large concrete, spherical and pyramid sculptures from rocks found in his travels around the country. He mounts those on pieces of wood from his property north of Eureka Springs.

“The cast concrete sculptures are acid stained to add rusty Earth tones to their bowl and tower forms,” he said. “The bowl shape symbolizes humans’ early days while the cooling tower shape represents where we’re at in the twenty-first century. When put together they say, ‘We can live harmoniously with nature, if we try’.”

Currently he is focused on painting.

“My acrylics express some of the beauty I know is within,” he said. “People often say that they’re abstracts. I prefer to think of them as expressions of gratitude, and sometimes, cosmic playfulness. Our Milky Way galaxy, even beyond, is part of the cosmos. The hippies had it right when they said, ‘Cosmic, man.’ In reality, everything is, literally, cosmic.”