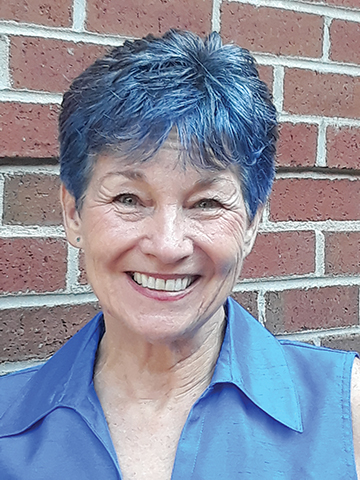 “When I die, I want to be a tree, a sour cherry tree because they’re sturdier and grow better than sweet cherries,” Eureka Springs resident Trella Laughlin said. “They also make the best pies.”

Laughlin has been pro-environment her entire life, and wants to continue that belief system in the way her body is handled after she dies. Instead of being embalmed with toxic formaldehyde chemicals, she wants to be composted.

That makes a lot of sense, according to Vickie Kelley, with the Natural State Burial Association, whose mission to provide environmentally sound burial and diverse memorial options through the founding and operating of cemeteries designed to conserve natural landscapes.

Are people creeped out when Kelley starts talking about green burial?

“That is not normally the case,” said Kelley, who gave a presentation recently in Eureka Springs. “The first thing I usually hear from people is, ‘That is exactly what I want to do.’ The second thing I hear is, ‘Is that legal?’”

Actually, green burial is the way most people were buried for millennia. It has only been since the late 19th century that current and expensive modern funeral and burial systems were developed. A lot of what is involved with that is as far from natural as you can imagine.

Kelley said the current conventional burial practices don’t honor future generations because of the space that might be better suited for other uses, and the expense of maintaining cemeteries full of gravestones that deteriorate over time.

“It is also disrespectful to our ancestors – the settlers, the pioneers, the slaves, the early people whose bodies were not documented,” Kelley said. “It is arrogance to think we should take up a permanent spot on earth that is perpetually marked instead of just being returned to the earth from which we came. We continue to take up space that could be used as green space, that could preserved as wilderness for wildlife and natural habitat.”

The vision of the Natural State Burial Association is a green burial in a natural cemetery wrapping an un-embalmed human body in a shroud, placing that body in a grave, covering it with earth, and letting nature take over.

“Imagine the beautiful simplicity of a natural burial,” Kelley said. “Something about the way things used to be rings very true for me. What triggered my discomfort with the products and procedures of the modern funeral industry? What sparked my yearning for a most basic and unencumbered surrender to Earth’s final embrace? What called me out of my comfort zone to take on the challenge of establishing a natural burial ground in the Ozarks? I don’t know exactly. But I have spoken with enough of people here to know that many others here want this, too.”

Kelley believes that when people are ready, when they realize the time for change has come, that spirit inspires the collective conscious and calls us to act. We have no choice but to find the means to create this place.

“We each have a concept, a vision of our final resting place,” she said. “We each will contribute what we can, in all the unique and important ways we can to make the Arkansas Natural Cemetery a reality. Together we will co-create a sanctuary where the process of becoming earth is peaceful, harmonious, and just as natural as can be.”

Right now, cemeteries in Arkansas are required to accept people for natural burial. There is no requirement that you be embalmed or have an expensive casket – although some cemeteries require you be placed in a concrete vault. You don’t have to be taken to a funeral home. The body can be cared for at home, placed in a simple casket, and transported to the cemetery without hiring a hearse. You can be buried on your own land, but then it has to be officially declared a cemetery that, in Arkansas, impedes future development of the property.

“We don’t have any qualifying natural cemetery yet, but you can request as natural a burial as possible,” Kelley said. “But it is not creating the green space.”

There is a goal of creating a natural cemetery in Northwest Arkansas. In addition to prohibiting chemical embalming of the body, there are no grave liners or vaults, and only biodegradable burial containers such as a plain pine box, a wicker or cardboard casket, or a fabric shroud can be used. While there is diligent caretaking of the property, there is no turf cover to mow and manicure, no intensive watering requirements.

“There are no attempts to control nature with pesticides and herbicides,” Kelley said. “Instead, a natural cemetery allows nature to take its course. Rather than monuments or markers, gravesites are designated by GPS coordinates that provide information as to the precise location of a grave for cemetery records and for visitors. When someone chooses to plant a memorial tree, shrub, or flowering plant, they must choose an indigenous species. A natural burial ground is committed to the restoration of native vegetation, thus encouraging birds and other natural wildlife to inhabit the area. Those who are laid to rest there become a part of the natural beauty and the ongoing cycle of life.”

Kelley sees what is done with your body after you are done with it as your final act of environmental responsibility, the last thing you get a chance to “recycle.”

“Whether you are driven by environmental concerns or a deep spiritual conviction, green burial is clearly your best option to peacefully and harmoniously be reunited with the earth,” she said.

Conventional funerals and burial are also very expensive, currently running about $10,000. Those can be a burden on families, and for what? Embalming even in a hermetically sealed box does not preserve the body. Kelley said it still degrades into a toxic sludge. The gases can break the seal of the casket, and then you have a gooey sludge that escapes. People in the cemetery industry refer to this as “coffin liquor.”

Why not just let the worms have their way with you?