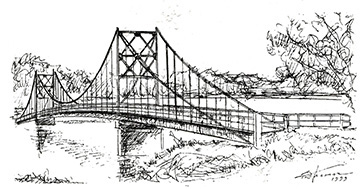 National treasures are as enchanting and novel as Route 66, moon rocks, the Grand Canyon, Tabor Opera House and The Delta Queen. A national treasure is a shared cultural asset, so it seems reasonable to include Toni Morrison, Willie Nelson, and Mr. Rogers.

People, places or objects can be national treasures. All they have to do is add value to the entire nation.

We have no shortage of national treasures, nor do we have nearly enough. We lost one last Friday.

There are great people in this country who resist being told what to do, who make a statement with their tongues or their lives to make our span easier and more dashing.

Last Friday night when Ruth Bader Ginsburg’s death was announced, TV cameras went to the Supreme Court and filmed people, tens, hundreds, then hundreds and hundreds more, who wanted RBG to know that they knew what she had done. It was as if a monarch had died.

“How sad this is,” one commentator said.

No. Inspiring. This is a tribute, an emotional lei of orchids, an acknowledgment of a woman who understood that feminists were not only women. This is about a woman who spent her life explaining fairness so anyone could understand it.

Justice Ginsburg downplayed her ambition to get what she wanted. It wasn’t lost on her that Citizens United unleashed Super PACs and under-the-table corporate money to tilt laws and politicians to favor those who needed to be richer, tackier, and exempt from the laws of our country.

She did her homework, talked it over with her husband, and voted as though all our lives depended on it.

She made sure people understood that gender equality was, as she said, like “knitting a sweater.” It takes patience. Knit a stitch, purl another, keep after it. Pretty soon you’ll have a sweater you can wear to the Christmas party or give to Mrs. Clarence Thomas in a gesture of warmth.

But keep after it. Know what you want to do and do it. The trick is, don’t expect what you want to give you an easy path. RBG knew that anything worth the time of her life was something she thought about, wondered about, and tried out. She got really good at it. That’s the inspiring part.

Our choice now is do we give in or do we carry on? Lots of times women get together just to be together. Nothing in particular. Just energy – when there are more women there are more cigarettes. A good thing.

It’s young women who will see that patience inflates kindness and toughness, but anyone who takes a good look at women sees that they’re forever young. Even at 87.