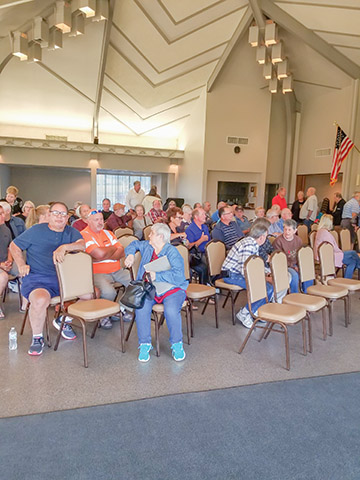 A group of Holiday Island residents dubbed the Holiday Island Citizens for Incorporation (an organization registered with the Arkansas Ethics Commission) invited all residents to attend a kick-off drive for a petition-signing on Monday night. HICI rented the ballroom at the Clubhouse to hold the meeting where residents could add their names to the petition and donate funds to cover the legal expenses for corporation endeavors.

“We are now eligible to become a city,” Mills said. Over the next few weeks HICI will be campaigning for resident signatures with the goal of 25 percent of the district’s registered voters, about 500 signatures. The certified petition will then be submitted to the Carroll County Quorum Court for approval to ultimately be placed on the 2020 ballot for the residents’ vote. “This is going to be a democratic process,” Mills said.

Those who sign the petition are free to vote one way or the other on the ballot. If a majority of votes indicate “yes” on the 2020 ballot, Holiday Island will be an incorporated town.

This effort is a second attempt to place the vote to the residents to incorporate. In 2018 the effort was halted by Carroll County Judge Sam Barr who denied the request after the certified petition was filed. Frustrated with Barr’s original decision, Kees said, “We don’t think we were treated very fairly in the hearing process.”

Mills described the denial reasoning as ineligibility under newly changed state statutes. Specifically, Kees said, “An effort to incorporate by direct petition in 2018 failed due to changes made to A.C.A. 14-38-101 that prevented Holiday Island from incorporating due to its’ proximity to Beaver.”

Kees also described additional objections by Barr including 1) a concern that the petition was not clear as to method of incorporating via 14-38-101 direct petition or 14-38-115 petition and election and 2) unclear to the court as to how the proposed city intended to fund itself as a self-sufficient community.

Since the denial in 2018, the HICI committee has worked diligently with State Representative Harlan Breaux, State Senator Bob Ballinger, and the Arkansas Municipal League to change A.C.A. 14-38-101 and 14-38-115 to remove restrictions impeding Holiday Island. With these measures now taken, HICI can begin the petition process again. Kees assured the residents that Barr’s concerns will be clearly and sufficiently addressed in this second attempt.

“Why incorporate?” Kees asked the audience as a reminder of their long-held efforts. Kees said the district currently has resources to operate and maintain its assets (roads, water wells, etc.) However, he explained, HISID does not have the legal authority to control land use, enforce building codes and standards, nor advertise and promote Holiday Island.

Additionally, HISID does not have the authority to receive gasoline taxes, sales taxes, and road taxes that its residents are already paying now which go to the county and/or state. State and federal grants will also be available to a city, whereas a district is not generally eligible. Kees said that for these reasons Holiday Island should move forward to improve the community and evolve into a real city.

“There will be two separate boards,” Mills said, “a HISID board and a city council. We have a working agreement – the Board of Commissioners has signed a resolution where they support incorporation.” Mills said with assurance, “We are working in tandem.” He said he expects the city and HISID to share facilities and resources for the overall improvement of the community.  “The city will do what the SID can’t.”

What about additional city tax? “We’re going to give out a budget that shows we can exist without any additional tax,” Mills said, adding that incorporation is the only way Holiday Island can move forward. “We’ve reached the end of the line. It’s no longer a development and the district can’t do it.”