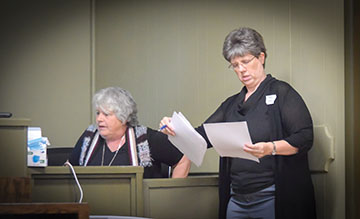 A machine designated to count only absentee ballots that arrived improperly calibrated to the tabulator will delay counting 2000 ballots until late Wednesday afternoon, according to Carroll County Clerk Connie Doss.

Voting For abolishing the Historic District Commission is running behind preserving it 648 – 247.

In city council races, Ward 1 Position 1 is currently led by LauraJo Smole, 434, to Susan Harman at 402.

Complete election results will be posted at eureka.news as soon as we get them, anticipated by early evening Wednesday.