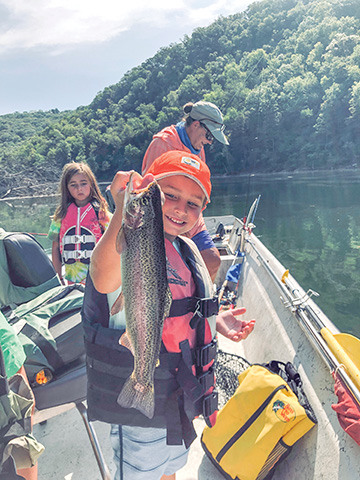 Another week in paradise having a blast turning people on to the beauty of nature. Whether we were out sightseeing or out catching big fish, it’s really all about being out there. On our sightseeing tours we have seen some beavers this week. One was even captured on video. You can view it on the Facebook page Custom Adventures Guide Service.

Fishing trips have been producing some big trout these last few weeks, like this one here that Henry Smith caught and released to fight another day.

The practice of catch-and-release says it all in its name. Anglers catch their fish, then gently release back into the water, sometimes after a quick photo. The handling of the fish is what’s really important here. If the fish is out of the water too long or isn’t released properly, then this practice is pointless.

Anglers who practice catch-and-release will have a variety of tools to help with the release. Everything from non-barbed hooks to nets with a rubber coating to protect the fish’s coating. And make sure you don’t touch the fish too much, touch the gills, or keep it out of the water too long. The quicker you can get the fish back in the water, the better for its survival rate.

The other option is for anglers to harvest their catch, which means keeping the fish you catch. After harvesting, most anglers will make a feast out of their catch.

We understand the benefits of both practices: catch-and-release and harvesting your catch. Hiring a local fishing guide and going out on a trip is a great option,  they’ll be able to identify your fish and then recommend which practice to follow. It’ll be a fun day of fishing with no worries!