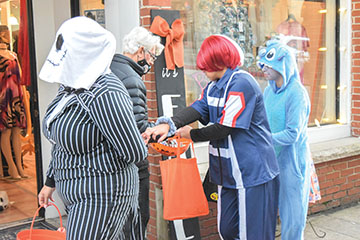 It was a very different Halloween weekend for 2020. White Street normally would have had many homes decorated and thousands of costumed trick or treaters. This year there were few decorated homes, and not as much trick or treating. Most people were wearing masks for protection against Covid-19.

At two churches on Hwy. 23 South, \ church offered “trunk or treating” with adults not wearing masks handing out candy from car trunks to children. A nearby church that in earlier years had done “trunk or treating” switched to a drive-through event where adults in masks and gloves handed out a paper sack with individually wrapped candy to kids. Trick or treaters and their drivers didn’t get out of their cars.

“There is just this divide,” Bell said. “Some people just won’t wear masks and won’t take precautions. I think it is important that we carry on and do things that are meaningful for us in a thoughtful, safe way. This is hard for everyone. You want to go on living life as usual, but you really can’t. We have to make modifications to our life.”

The day after Halloween, Nov. 1, Arkansas set a new record for the highest numbers of Covid-19 deaths seen in one day, 33. On Monday, the state hit another high in the number of hospitalizations, 688. Of concern was the fact that the number of active virus cases also reached a record high of 10,420.

Arkansas continues to have one of the highest national rates of new infections, ninth in the country, in the number of new cases per week for the past 30 days. The total number of cases had climbed to 112,190 with an average of 868 cases per day. Deaths total 1,925.

Bell said the direction the country is headed is what experts have predicted.

“Covid cases are going to continue to increase, and it is not going to slow down until sometime after the holidays,” Bell said. “Now we have more active cases in the communities, more people are likely to catch the virus. It is likely to pick up. Unfortunately, this is on course with the projections from all the experts.”

Bell said it bothers him considerably that Arkansas is in the top 10 states for new Covid infections with 8.5 percent of Covid tests coming in positive.

“There is a lot of Covid fatigue,” Bell said. “People are tired of staying locked up, and a lot of people are not wearing masks. They are ready to socialize and enjoy each other’s company.”

The Independent received reports that Saturday night, a downtown nightclub was filled to capacity with about 115 people celebrating Halloween without wearing masks or social distancing. Staff was also reported to not be wearing masks. The nightclub owners did not respond for comment.

Bell said that type of scenario is a formula for real problems.

“That could have been a super spreader event,” Bell said. “A group that size could have nine or ten folks who have Covid. We are all mostly indoors now. It is a formula for this to steadily increase. It is not time for people to be less cautious. It is time to be more cautious.”

Another downtown bar that had seen large crowds not masking or social distancing closed unexpectedly for about a week in late October. Calls to the owners for comments were not returned prior to deadline.

Neither the Arkansas Department of Health nor the Alcohol and Beverage Control Commission reported any complaints or enforcement actions against the two bars. ABC spokesperson Scott Hardin said ABC inspected 15 bars and restaurants in Eureka Springs Oct. 29–two days before Halloween–and found no violations.

According to the Arkansas Center for Health Improvement (ACHI), as of Nov. 2, Greater Eureka Springs, indicated by the number of people within Eureka Springs zip codes including Beaver Lake and Holiday Island, has had 99 known infections representing one percent of that population, with 21 of those new infections.

ACHI reports no known infection at the Eureka Springs Schools. ACHI indicated Berryville Public Schools have had 17 staff and 58 students infected for a total of 75 cases with nine of those active. The Green Forest School District currently has fewer than five active cases, so was not listed in the latest reports. Overall, Green Forest schools have had 10 staff and 47 students test positive for Covid-19.

As of Nov. 2, information from ADH shows Carroll County is up to 1,005 people who have tested positive for Covid-19 with 912 considered recovered and 19 deaths.