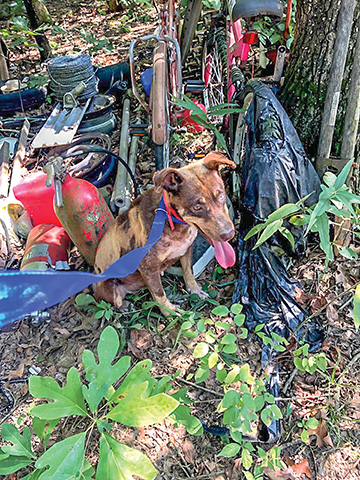 On Friday, Sept. 4, a cadre of dedicated animal rescue organization workers and volunteers sprang into action to save the lives of 30 dogs that had been malnourished and mistreated in a rural area of Boone County invested by fleas, ticks and chiggers.

Jay Fusaro, board president of the Good Shepherd Humane Society, said the staff of the 14th Judicial District Prosecuting Attorney’s office requested assistance and helped throughout the process while the dogs were captured. The Boone County Sheriff’s office secured the location and was needed because it was not considered a safe area. In addition to being arrested for animal cruelty, the owner of the animals was also arrested on other charges.

“Even though this was obviously outside of Carroll County, our mission county, our staff and board believed we needed to help,” Fusaro said. “As a result, Cole Wakefield, the adoption center manager, went above and beyond the call of duty to assist. Cole took it upon himself to reach out to several other rescue operations in the area and put a team together to go out and save the animals. Our team consisted of the Good Shepherd staff, board members and volunteers, as well as our new veterinarian, Dr. Zachary Scheurich.”

The situation that greeted the rescuers was grim. In addition to a lot of dogs and puppies running loose, some were chained, some were in cages, and all were extreme cases of malnutrition and had anemia from being covered with flea and tick bites.

“Their gums were white because their blood and nutrition was being depleted from them,” Fusaro said. “They were in tough shape. But the happy ending is that we believe all of the dogs are going to make it, and we fully anticipate that they will find their forever homes. They are spread out among the different organizations.”

The dogs at Good Shepherd are in quarantine to protect other animals at the shelter. The mostly small-breed dogs are being treated with tick and flea medication, are receiving proper vaccinations, and will be spayed and neutered.

The volunteers wore bug repellent, but that proved inadequate. One volunteer had so many bites on her legs it looked like she had the measles. “It was a bad infestation,” Fusaro said.

“I am covered in chigger and tick bites, as is everyone,” board member Melissa Greene said in a Facebook post. “We covered ourselves with spray. LOL, they found areas that didn’t get sprayed. Those poor dogs were covered. That is going to be the biggest health problem along with being malnourished.”

In addition to Greene, volunteers from Good Shepherd were board member Tracy Williams and store manager Janet Chupp. Staff also assisted. Another volunteer was Weazl Gazel. Gazel, who has fostered aggressive and feral dogs for the Good Shepherd for 10 years, said she had never been involved in such a large animal rescue operation.

“This was a hoarding situation,” she said. “He hoarded a lot of others things in addition to the dogs. Some the dogs had their chains grow into their necks. There were dog skulls over the ground, and a half-eaten puppy. These dogs were starving and had no water. The real hero is the prosecuting attorney. We would not have been there if they hadn’t reached out to us and believed the dogs should be saved.”

Fusaro said that the rescuers could have been bitten. The demeanor of the dogs was unknown, but most appeared to be friendly and socialized.

“That is terrific,” Fusaro said. “It made them easier to capture and they will be easier to adopt because most are socialized.”

Fusaro said he wants people to know when they donate money to Good Shepherd, this is the kind of work that is being done in the community. “The staff consistently goes above and beyond what is expected of them,” he said.

Animals will be available for adoption in seven to ten days.

Any donations to help offset the cost of vaccinating and fixing the animals would be greatly appreciated. Go to goodshepherd-hs.org/ or facebook.com/GoodShepherdHumaneSociety to donate.