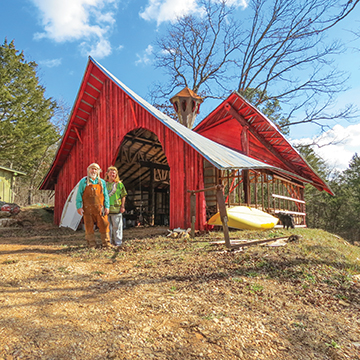 By Becky Gillette – In some cultures, there is no greater complement than to affect someone so emotionally that you move them to tears. And that is a common reaction to visitors touring the whimsical, one-of-a kind home created on by artists J.D. and Cathy Harris on Hwy. 23, about four miles north of Eureka Springs.

“It is amazing the number of people who cry when they see the house,” Cathy said.

The 2,000 sq.-ft. home was designed to look as if it were an island in the middle of the ocean. The roofline is in waves, there is a shower that mimics being underwater and you can see the bottom of a boat on the ceiling of the living room. Upstairs, the boat is a bed.

The compound is difficult to describe, certainly unlike anything else you are likely to find on a normal day trip. The kids on the school bus probably have nailed it best, as they refer to it as “the Dr. Seuss house.”

The home is just one of a number of buildings at the Harris Art Garden & Gallery that aren’t just structures, but works of art. Nothing is square, roofs are canted at unusual angles, and throughout you will find the metal sculpture work of J.D. and the stained glass and beaded jewelry art of Cathy.

There is a studio/gallery close to the road, and the house is in the middle of a cluster of buildings. Other buildings include a greenhouse now being used as carport, an enclosed storage building with carport, a playhouse, a guesthouse and a big red barn. That was originally intended as a structure to house their head-turning, one-of-a-kind metal boat.

“But JD liked the red barn space so well we decided to make that into a studio for him,” Cathy said. “So we are just waiting until spring to pour a slab, finish the rest of it, and move all his equipment over there.”

The couple used to live on North Main across from the Art Colony in Eureka Springs that they started in 2006. They moved out to Hwy. 23 about eight years ago, living the first three and a half years in a 24-ft. fifth wheel trailer while working on the buildings. They originally envisioned building affordable housing on ten acres. But other buildings came out of J.D.’s imagination, so it has now turned into an art compound.

“It is wonderful,” Cathy said. “This is our island, and we want to feel like we are on vacation every day. Everything around us is fun.”

The newest structure, the red barn, has a lighthouse on top of it. It adds to the marine feel of the property. The kid’s playhouse next to it has large rope ladder going up to the doorway, again fitting in with the nautical feel of the place.

The compound aligns with their love of the environment. Many materials have been recycled or reused. Trees used as posts were harvested either from the property or nearby. Cathy likes to cook, and her pantry includes storage made from old school lockers. All the windows were repurposed having been purchased from the Habitat For Humanity store.

Views from the home were also crafted for maximum enjoyment. From the hanging chairs in front of a pot-bellied stove, they can see the sun rise in the morning and set in the evening.

Sometimes projects change from what might initially have been conceived on the drawing board. But J.D. gives a guarantee: If he builds something for you that you don’t like, you don’t have to buy it.

Looking at all the art and buildings, you would think this couple never does anything but work. But they say that while they work a lot, they take a couple days off each week and make time to play. The only time he ever sketches plans out is if someone else needs to see them. Cathy helps during construction by running the backhoe. She also does painting, trim and decorating of the buildings.

J.D. has no shortage of projects planned.

“He has so much in his head, there would never be enough time to get it all done,” Cathy said. “In the past couple of months he decided he wanted to create bigger sculptures. So he built himself a double-sided power hammer and coal forge. We have been married twenty-six years, and I have seen J.D.’s work evolve a lot. He has given himself more freedom. His skills have evolved. He doesn’t work on anything that doesn’t make him feel good. And it just keeps branching out. He is always learning something. The year before last he made a mutant vehicle for a man from Kansas City to take to the Burning Man event in Nevada. There were thousands of art vehicles out there. And a picture of our vehicle made the Burning Man calendar this year. That’s one of the things he is most proud of.”

J.D.’s current projects include ten-foot-tall sculptures of a trout, a bass and fisherman being considered as public art for the City of Cassville, Mo. He’s also working on an eight-foot-wide turtle being ridden by a little girl with pigtails. A smaller project is leaf-shaped outdoor fireplace being built for a friend.

Cathy used to do a lot of stained glass, but now concentrates of a new form of art she created that she calls house jewelry. She started by weaving and beading her grandmother’s crystal bead necklace.

“I call it house jewelry because I use jewelry quality crystals for this artwork that hangs in the window,” Cathy said. “J.D. makes frames for me. I have jellyfish and other designs that I sell. I do some custom work where ladies bring family crystals that no one uses anymore and make it into crystal art for them.”

There is tremendous creativity in everything this couple touches. But they don’t consider what they do “work.”

“It’s all about having fun in life,” Cathy said. “We’re going to have the most fun we can have.”