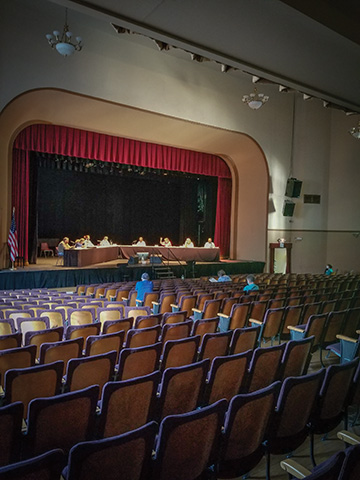 Mayor Butch Berry fulfilled his promise to address the speeding on East Mountain Dr. by reducing the speed limit to 15 mph, reinstalling previously removed speed bumps and assigning a policeman on the road to monitor traffic. Berry said at Monday’s city council meeting that the officer would be issuing speeding warnings for the first stage of monitoring, but imposing speeding citations shortly thereafter.

The second is “By the City of Eureka Springs encouraging the use of masks in relation to the Covid-19 pandemic.” This is to be in effect for 60 days and does not attempt to mandate use of face masks, nor does it penalize those who choose to abstain from wearing them, but “strongly encourages all of those who may safely wear facial coverings to do so.”

Alderman Harry Meyer said that the resolution was prepared by the Arkansas Municipal League and “is the best we can do. I’m all for it.” Both resolutions were passed unanimously.

Finance Director Lonnie Clark said sales tax revenues for May are 18.31 percent below last year, indicating that the city’s 33 percent budget cut should be sufficient. “We are making it work,” Clark said. “We could really have a good year, still.”

The next Council meeting is Monday, July 13, at 6 p.m. in the Auditorium. Public comments are still requested to be sent to the mayor before the meeting.