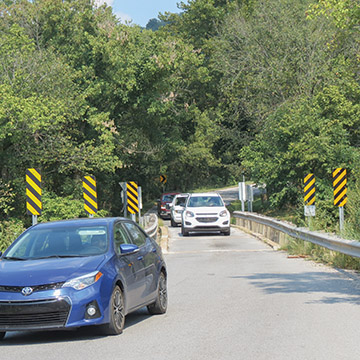 The one-lane bridge at Elk Ranch over Leatherwood Creek on Hwy. 187 northwest of Eureka Springs is quaint and slows traffic on a narrow country road. It has long served as an artery used by people who want a shortcut between US 62 and Hwy. 23.

At times the bridge has been closed while repairs were done, including after major flooding, and closing it can add 20 minutes or more to a commute. Some people would prefer the bridge continue to be repaired rather than replacing it. But the Arkansas Highways and Transportation Department (ArDOT) has budgeted about $400,000 to replace the bridge in 2021.

ArDOT estimates the demolition and rebuild of the bridge will take about 18 months with the contract being let in the summer of 2021.

The bridge became a hot topic of local discussion recently when ArDOT did a survey near the bridge. ArDOT spokesman Danny Straessle said the decision has been made to replace the bridge because it has reached the end of its useful service life and is costing too much to maintain.

“It is better to spend on replacement rather than spending all that money on maintenance,” Straessle said. “The bridge is in the Statewide Transportation Improvement Program. It is estimated to cost about $400,000, which could change. If anything, it will probably increase. It is marked for replacement in 2021. That too can change. The STIP is updated every year. It could move up or down in priority. When we get to designing the project, the actual letting date is determined by how well the design process goes. So, there are a lot of factors that can influence the timing of this, but we have to start somewhere with a plan.”

ArDOT anticipates wrapping up design on the project by next May. It is expected to be 80 percent federally funded  and 20 percent by the state. ArDOT has yet to determine if it will take public comment on the project.

“The replacement of the bridge has been scheduled for a long time,” Straessle said. “At one time in the 1980s we were looking at new bridges over Leatherwood and Butler Creeks.”

There are concerns that a new, modern bridge would take up quite a bit of land on either side of the bridge for approaches. Those whose land has been in their family since the 1820s could be affected.

What will be the environmental, cultural and historical impacts of the bridge replacement? Straessle said it is too early to determine the impacts. It would be dependent on the method of replacement.

“The next part will be an environmental study,” Straessle said. “Engineers will evaluate the survey data, cultural and historical factors and environmental impacts, and decide from there the best approach. I don’t know if it will rise to the level of public meeting status. There is a lot of work to be done between now and 2021 and the letting of a contract.”

Replacement of the bridge was last under major consideration in 2005 when Kate Lucariello reported about concerns that replacement of the bridge would destroy a historic log cabin and unmarked graves. At the time, the Elk Ranch bridge was one of three scheduled to be replaced by the ArDOT. Others included the popular “Little Golden Gate” bridge, a one-lane suspension bridge over Table Rock Lake. There was also a two-lane bridge planned to replace a narrow-lane bridge at Butler Hollow.

A local property owner spearheaded a campaign to stop all three projects, and a petition with about 700 signatures was presented to enlist the support of then U.S. Sen. Blanche Lincoln.

Dorothy Crookshank, who lives in Holiday Island, loves the little bridge just the way it is.

“A two-laner will change the character of that creek,” Crookshank said. “And it is a very short bridge, so waiting for another car to cross only takes a couple of nano-seconds. That gives more time to take in the view of the creek. It is just an idyllic little drive and then you go over the Beaver Bridge. I take that way to go into Rogers. Replacing it with a two-lane bridge would ruin the character of what the drive is like.”

Crookshank said there is etiquette involved for drivers on both the Elk Ranch and Beaver bridges as vehicles are supposed to allow whoever reached the approach to the bridges to go first.

“Most people follow the etiquette and are good about it,” Crookshank said. “There is a lot of camaraderie among people who drive it. We usually wave at each other because each has done our part correctly and politely. Sometimes people will wave you ahead even though they arrived first.”

Some people have expressed concern that if the Elk Ranch bridge becomes history, so will the Beaver Bridge, one of the more photographed spots in the county. But ArDOT said there are no plans at this time to replace the famous suspension bridge.

Recent reviews on Trip Advisor indicate that some people find it scary to drive over the one-lane bridge with a wooden deck.

“I took my elderly mother on a drive to Eureka Springs; instead of returning the way we came, I trusted Siri to get us back to where we were staying in Bentonville,” said a woman from Texas. “She did, but when we got to this bridge…! It really looks as old as it is. I was surprised that we actually had to drive over it! I didn’t realize it was the Beaver Bridge until later. First time I had ever heard of it or seen it even though I used to drive quite a bit years ago in that area. Not planning a return trip! Would not drive over in a RV or heavy vehicle!”