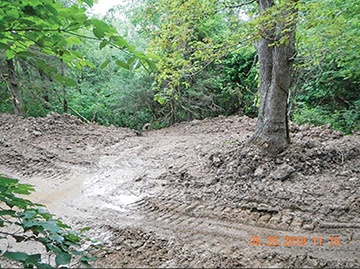 Responding to complaints from several area residents observing activity since October 2018, the Arkansas Department of Environmental Quality sent an inspector to look at property of about 600 acres off Rockhouse Road near Winona and Keels Creek where exploratory drilling is being conducted to determine the feasibility of locating a quarry in the mountainous area. The inspection resulted in a notice from ADEQ that current activities at the site have violated the Clean Water Act.

In a letter dated June 5, Skyler Schlick, District 2 Field Inspector for ADEQ’s Office of Water Quality, said a complaint investigation was conducted at the property May 29 in accordance with provisions of the Clean Water Act.

“The following violation was noted during the complaint investigation,” the letter states. “Sediment runoff was observed in an Unnamed Tributary (UT) of Keels Creek from road widening activity on an existing access road. This is a violation of the Arkansas Water and Air Pollution Act 472 A.C.A. § 8-4-217 (a)(2) which states: It shall be unlawful for any person to place or cause to be placed any sewage, industrial waste, or other wastes in a location where it is likely to cause pollution of any waters of this state. Best Management Practices (BMPs) must be implemented to prevent the sediment runoff from entering the UT of Keels Creek. Additionally, drilling/bore mud must be managed to prevent discharge to the waters of the State. Please be advised that commercial mining will require federal/state permits.

The ADEQ inspector met with Moore on the site and discussed the plans for the site. “Mr. Moore was aware of all the future permits needed to be obtained if the site were to be used as a rock quarry,” the inspector said.

The violation notice also contained information from the inspector about what precipitated the concerns: “May 24, 2019 We have had 3 complaints today; all telling me of their concerns over Legacy Milling, LLC is causing the creeks in the area to have silt in them from the widening of the road. The two creeks are Keels Creek and Winona Springs Creek. These callers all have wells; and with the drilling going on there, they are all worried their wells will be contaminated. The callers all said the owners never came around and talked to them about what was going to happen in the area. Legacy Milling has ruined the property values. All said this is taking place on CR 3027 about 3 to 3 ½ miles outside Eureka Springs.”

Another note said the ADEQ received five more complaints, bringing the total number of complaints to nine. All were residents concerned about sediment pollution from the site impacting Keels Creek and Winona Springs Creek, both of which empty into the Kings River.

The investigation report said a bulldozer was being used to widen and create an access road. “There was a metal tub that recirculated water used for drilling is either recycled or lost in the bore/hole formation,” the report said. “All drilling mud must be managed to prevent discharge to the waters of the State.”

The report included photos of muddy road areas with what appeared to be bulldozer and/or large truck tracks through it. The photos did not show any measures taken to prevent sediment-laden storm water from leaving the site. Other photos showed areas of bare dirt where it appeared grading had piled up a mound of dirt on the side of the road. Another photo was described as “Sediment accumulating in UT of Keels Creek adjacent to access road.”