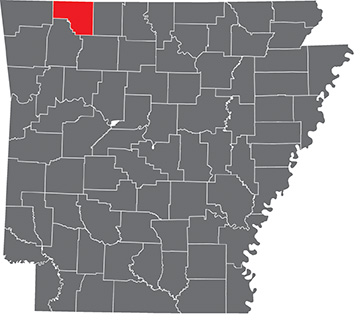 At a time when President Donald Trump is threatening public schools with the loss of federal funding if they don’t reopen traditional classrooms in the fall, the red zone information was not released to the public, but unearthed by the non-profit watchdog group Center for Public Integrity.

States were considered in the red zone for new coronavirus cases if they had more than 100 new cases per 100,000 residents. Carroll County was one of 13 counties in the state meeting the criteria for being in a red zone. The county went from 57 cases and one death on June 12 to 270 cases and six deaths on July 20. Sources said one additional death in Green Forest has not yet been added to the state’s website for county data on the virus.

Arkansas has been regularly breaking records for the number of positive tests daily, and on July 17 recorded its highest daily death total, 12. That increased the state’s total Covid-19 deaths to 353, lower than Mississippi, which has a population similar to Arkansas, and has reported 1,355 deaths.

Some states have information about rates of infection and deaths from coronavirus available by zip code. That information is critical for people to make decisions on precautions and decisions about reopening businesses, Doug Hausler, co-owner of Keels Creek Winery, said.

“Absolutely, Arkansas should be providing information according to zip codes such as is done in Florida and California,” he said.

Hausler recently did a Freedom of Information Act request to the Arkansas governor’s office requesting Covid-19 data by zip code. The response was that the information was not available.

“The state said they were concerned about potential privacy issues,” said Hausler, who has a PhD in chemistry. “If they are not collecting information on zip codes or addresses, there is something critically wrong. It is unconscionable to not provide this information.”

Hausler has filed a second FOIA request with the Arkansas Department of Health for the zip code information. While the request hadn’t been answered by the deadline, data from ADH was recently the source of an analysis by the Arkansas Center for Health Improvement of the number of Covid cases per city in the state.

The information shows that 94 percent of the Covid-19 cases in Carroll County as of July 9 were in eastern Carroll County. Green Forest had 97 cases, Berryville had 91, and Eureka Springs had 12.

Hausler said while the low numbers for Eureka are reassuring, it is just a snapshot in time.

“It is critical that this website be maintained and kept up to date,” Hausler said. “East and west Carroll County are two almost totally different environments for people possibly contacting the coronavirus. The western side is primarily tourism. The eastern side is primarily agriculture and meat processing. To have a generic number for the entire country doesn’t allow us to make critical decisions.”

While Hutchinson hasn’t yet instituted other measures recommended for red zone states, he did a statewide executive order that went into effect July 20 requiring masks be worn when people can’t socially distance at least six feet apart.

The mask mandate has been opposed by people who question whether they are necessary or helpful. A major complaint is that requiring masks infringes on personal freedom. Some police departments have indicated they will not enforce the mask mandate, but Hausler said the it makes perfect sense.

“We don’t say, if you want to wear a seatbelt, that is okay, but we won’t mandate it,” Hausler said. “Isn’t this the same thing? Shouldn’t you be mandating masking because it will help stop the pandemic? One of the things we do at the winery is insist people have masks. If they don’t have one, we provide them. If you want people to do something, make it easy for them to do it. Everything we hear from the national health experts is that requiring masks will be helpful. I’m encouraged that we took that step.”

People report experiencing quarantine fatigue. They are tired of sheltering at home and want their pre-Covid lives back. Single people may feel particularly isolated. But the rapidly increasing rates are sobering.

“We all have to be diligent,” Hausler said. “It’s important that we know the source of the problems.”

ADH asked the Centers for Disease Control and Prevention to do a study on widespread community transmission in the Hispanic and Marshallese communities of Northwest Arkansas. Those findings suggest that workplace interactions – particularly among workers at poultry processing facilities – household, and community interactions are contributing to propagation of the virus.

Nearly half of the adult cases in Northwest Arkansas were among Hispanic and approximately 19 percent were Marshallese. About 40 percent of Hispanic cases and 28 percent of Marshallese cases reported employment related to poultry processing.

“Hospitalizations and deaths among the Marshallese population were disproportionately high,” the CDC report said. “Network analysis beginning with the first recognized cases in the area suggests some community spread, followed by a rapid increase in occupational relationships among cases who report employment in poultry processing facilities and a slow increase in community relationships during the early to mid-weeks of the outbreak; however, by early June there was substantial overlap of occupational, household, and community relationships.”

ADH reports a total of 71 cases of Covid-19 in Carroll County poultry processing facilities. ADH does not track family members of poultry workers, many of whom live in large family groups.

While Eureka Springs doesn’t have processing plants, and a relatively low incidence rate, Hausler said people need to be vigilant.

“We are not safe by any means, particularly in Eureka Springs where tourists are coming in from hot spots such as Houston, Austin, Dallas, Texas, Oklahoma City, Tulsa, Kansas City and St. Louis. Those cities have some of the highest incident rates and rates are growing. We don’t do anything as a state saying those people can’t come in.”

As a business owner, Hausler is sensitive to the concerns about further restrictions on businesses struggling to survive. Few businesses have not suffered financial losses as a result of the earlier closures. But he argues that businesses need good information about local transmission to make good decisions.