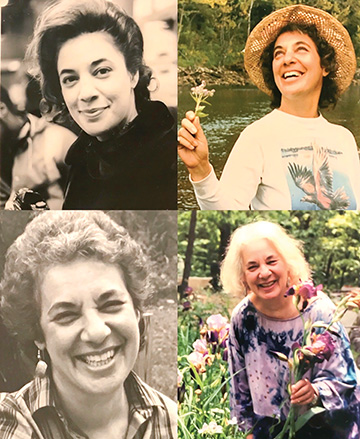 Barbara Harmony finished the journey of her lifetime on August 11, 2020. Barbara was a truly unique individual who had a positive impact on so many people.

Barbara’s story began in February 1943 as the first born of three sisters to Israel and Marjorie Weiss of West Orange, NJ. From an early age, Barbara developed a wanderlust and a belief that things could be better. These traits led her to crisscross the country and later the globe (visiting roughly 40 countries) looking for her place in the world.

As a young woman, Barbara raised money for and met Martin Luther King, Jr. She also met Robert F. Kennedy while participating in an effort to help with integration in the southern United States. College took Barbara to Ithaca, New York, and then Goddard College in Vermont with a year abroad in Sweden.

After graduation, Barbara lived and worked for social change in New York City, San Francisco, Israel, Philadelphia and Newark, New Jersey. Still Barbara had not found what she was looking for. In 1974, she packed up her chartreuse Volkswagen Beetle convertible and headed west.

A series of coincidental events led her to Eureka Springs, Arkansas – a community she loved and would call home for the remaining 46 years of her life.

In Eureka, Barbara found what she was looking for – the ability to lead the life she wanted on her own terms.

She also met and married Jim Hovland. They had two sons – Richard, who passed away as an infant, and Ben.

While Barbara raised Ben, she also discovered a new passion that would define much of her life – water. As a co-founder of the National Water Center in 1981, Barbara continued to fight for clean water locally, regionally and globally as long as she was able.

In addition to being a water advocate, Barbara was committed to the concept of lifelong learning. She was dedicated to exploring ways to make the world a better place. In short, Barbara sought to spread peace, joy, happiness and of course, harmony. It was this effort that led Barbara to make lifelong friends who would share in her life’s joy and also care for her until the end of her life.

Barbara was preceded in death by her parents, son Richard, and Jim Hovland.

She is survived by son Ben Hovland, his wife Kelly, and her grandchildren Harper and Henry who all live in Maryland; her sisters Joanne Libfeld of Oak Park, Ill., and Elizabeth Fitton (Lon) of Mt. Shasta, Calif.; nieces Lisa Maley (Dan) and Jessica Krall (Robert); nephews Chris Fitton and Ian Fitton (Meadow).

To know Barbara would be to know that a list of her survivors would not be complete without acknowledging her many friends and the community she loved so much. Fortunately for Barbara and all those that loved her, such a list would be too long for the page.

A celebration of Barbara’s life will be announced at a later date after the current pandemic, when it can be done safely and in a manner deserving of her memory.

In lieu of flowers please honor Barbara’s life by doing something kind for another person. In this difficult time, nothing could be a more fitting tribute to the life Barbara lived than to make the world a little better place even in the simplest of ways.