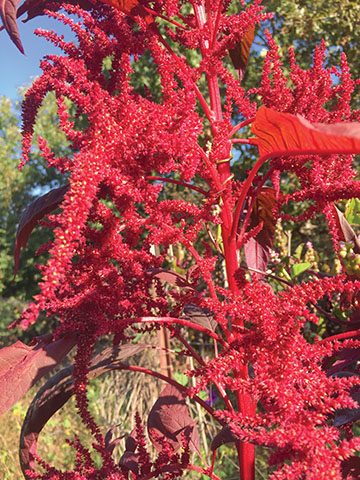 In the prehistoric times before 1983, Organic Gardening magazine featured amaranth on its cover one month, along with an article about how this ancient plant, once so important to indigenous Americans of Mexico and South America, was being rediscovered and would probably save the world because it was so nutritious. I certainly wanted to save the world, so I decided I better find some seeds.

Amaranth is related to pigweed, quinoa, lamb’s quarters and celosia. There are many species around the world, and it has been a staple food crop of some societies for more than 6000 years. Amaranth is easy to grow, and it can be a prolific self-seeder because it produces large, showy flower-heads containing thousands of seeds.

It has been a major part of local diets from the Andes through Central America into Mexico. The Aztecs developed their sophisticated empire in central Mexico beginning about 700 years ago, and amaranth was a signature component of their agriculture and society.

Along came Cortez the Conqueror who captured the Aztec capital, murdered thousands of people and banned the growing of amaranth. He recognized the plant was not just an important food source, but integral to religious ceremonies and cultural identity for the Aztecs, so he burned amaranth fields and threatened strict punishment for anyone caught with it. Bummer.

However, nobody has seen Cortez lately, and I have amaranth sprouting in my garden every year. It is most famous for its tiny black nutritious seeds, but I like the leaves also. I harvest them for use like spinach and chard, and they dehydrate nicely for crumbling into soups and casseroles (like I ever make casseroles). Recipes from Asia, Africa and South and Central America feature amaranth leaves, but not so much in North America.

When a gardener harvests the seeds, there will be chaff mixed in, but anyone who wants the seeds can figure out how to sift them. The seeds can be milled into a flour or they can be sprouted for salads or as an addition to soups or casseroles (like I ever made a casserole).

Plus, the seeds can be popped like corn! It’s called puffing. The seeds are gluten-free and rich in protein, and folks in some countries eat puffed amaranth seeds for breakfast. In India and South America, puffed seeds are mixed with honey or molasses and made into a sweet confection sold in markets.

To puff the seeds, use a tall pot because the seeds might jump around. Preheat the pot using a moderate temperature and shake the pot often so they don’t burn. Culinary adventurers (folks who make casseroles) have posted online dozens of tasty, creative ways to use puffed amaranth seeds.

So what is the reward for eating amaranth besides saving the world? It is packed with vitamins, fiber and minerals. It has more manganese than monkeys have maneuvers, and manganese improves brain function. It also contains generous portions of phosphorus, iron and magnesium which benefit muscle and bone health.

Amaranth is full of antioxidants, it inhibits production of inflammatory antibodies, and it moderates cholesterol levels while being naturally gluten-free.

Gardeners should note that amaranth self-sows easily. Once amaranth grows in your garden, you might never be without it. In my small garden, this is not a problem because I keep the plants I want and enrich the compost with the rest. On a large commercial farm, it can become a pest. For better or worse, it has been reported one species developed resistance to Roundup®.

Amaranth grows to six feet tall or more and it is a glorious rich burgundy like nothing else in the garden. It is a joy to behold, so I probably should make a casserole and save the world.